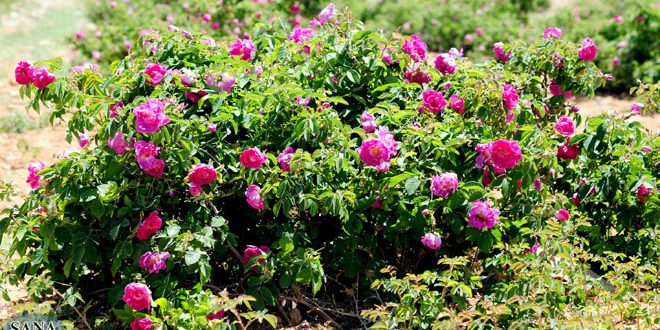 Damascus Countryside, SANA -Under the title “Our Rose is Our Ambassador to the World”, the Damask Rose Harvesting Day festival kicked off on Thursday with wide

Since the early morning, local farmers headed to the village’s fields and started to pick the Damask roses which are renowned for their genuine fragrance and highest
essential oil content.

The festival included folk artistic shows spotlighting the high value of this rose and its deep-rooted history, in addition to performing several musical pieces by
Sulhi al-Wadi musicians.

Agriculture Minister Ahmed al-Qaderi, Minister of Tourism Bishr Yaziji and other governmental officials took part in the activity, stressing readiness to provide
all kinds of support to preserve this rose which symbolizes beauty and love as Syria’s ambassador to the entire world.

The Damask rose grows naturally in the Qalamoun Mountains, al-Sheikh Mountain, and some areas in the Ghouta area in Damascus Countryside. It is also cultivated in al
-Qastal village near al-Marah, Yabroud area, Erneh, and Aleppo. Despite being a quintessential symbol of Syria in general and Damascus in particular, its economic
potential remains largely untapped in the country, but efforts from several sides, both official and civil, seek to change that and transform this captivating flower
into a valuable economic resource.

Apart from its therapeutic and cosmetic uses, the Damask rose also has culinary uses; rose water is used mainly in Damascene desserts such as traditional ice cream,
rice pudding, nougat, and assorted local sweets, and is often paired with pistachios, another popular ingredient in local cuisine and sweets. Dried petals or whole
flowers are also an ingredient in the mixed herbal tea known locally as “zuhurat.” Rose water is most commonly used in Syrian, Levantine, Arab, and Persian cuisine,
but it is also used to a degree in Western cuisine, mainly in the making of marzipan and turrón, a type of nougat made in Spain and parts of Latin America.