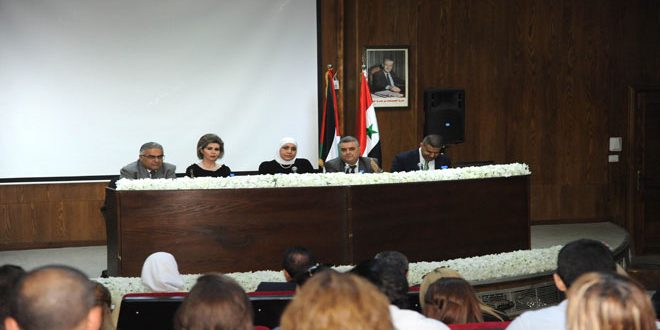 Damascus, SANA – Directorate of Developmental Media at the Information Ministry launched an anti gender-based violence project in cooperation with the National Committee for UNESCO.

Information Minister Mohammad Ramez Tourjman said that the launching of this project came within the framework of the Ministry’s ambitious plan to address social issues and negative repercussions of the crisis on the Syrian society, stressing media’s key role in putting spotlight on Syrian women’s suffering under current circumstances and finding appropriate solutions.

Social Affairs Minister Rima al-Qadiri underlined the importance of empowering women and enhancing their capabilities which will positively reflect on individuals and society as a whole, pointing out to the role of the Ministry, social care centers and civil associations in serving women victims of violence and caring about family affairs.

Representative of the National Commission for UNESCO, Nidal Hassan, said that the project provides an opportunity for decision makers to build capabilities of journalists and develop employees’ skills in media industry, in addition to changing the stereotype of women as caretaker.

Eva Shahin from the Directorate of Developmental Media made a presentation on the project’s plan and expected outcomes and objectives, adding that the main aim is to train journalists on how to deal with violence-related topics.

The participants stressed the need to follow up on the work of reporters and pay more attention to confronting violence against women and make field visit to shed light on this issue.

They proposed to set up a special protocol on victim-offender definition in order to not  distort the message to be conveyed and raise awareness about violence against women and children in refugees areas in the neighboring states.

The launching ceremony included displaying two documentary films about the sacrifices of Syrian women throughout the years and their achievements in different fields.