Al-Jaafari: We agreed on holding informal meetings of constitutional experts of our delegation and de Mistura’s team-video 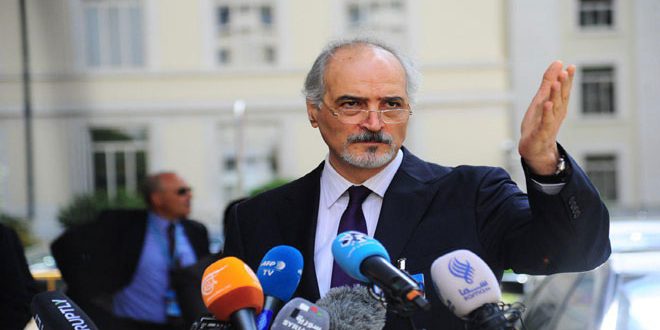 Geneva, SANA -Head of the Syrian Arab Republic delegation to the intra-Syrian dialogue in Geneva Bashar al-Jaafari said that the consultations with the UN Special Envoy for Syria Staffan de Mistura resulted in the agreement to hold informal meetings between constitution experts from the delegation of the Syrian Arab Republic and the Special Envoy’s team.

“During the past two days, we had extensive consultations with the Special Envoy and his team, and today we had a lengthy meeting with him in the morning. These intensive consultations resulted in an initial agreement between our delegation and the Special Envoy’s delegation, according to which an informal meeting started a few minutes ago between constitutional experts from our delegation and constitutional experts from de Mistura’s delegation,” al-Jaafari said in a press conference.

He added that it was agreed to dub this meeting “a meeting of experts only… constitutional experts.” He added that “the draft paper on the establishment of a consultative mechanism is behind us already, which means that we are talking about something that has nothing to do with what you had heard.”

Al-Jaafari also said that the Syrian Arab Republic delegation agreed with de Mistura that the meetings of experts are going to be informal and that they will be held today and maybe tomorrow if necessary.

He went on saying that the expert meetings are mainly an initiative by the delegation of the Syrian Arab Republic which brought up the idea of expert meetings to the Special Envoy as an alternative to the idea of the consultative mechanism, which did not succeed for several reasons.

Al-Jaafari said he hopes that this step will serve as a helping factor to push this round and the Geneva meetings of the Syrian-Syrian dialogue towards the seriousness that is hoped by all, “with the affirmation now and in the future that the subject of the constitution is the exclusive right of the Syrian people, and we do not accept any foreign interference.”

He elaborated further in response to a reporter’s question, al-Jaafari stressed that the work of the experts has nothing to do with the constitution as it is only a matter of exchanging opinions among the experts about issues that could be useful as technical issues in the constitutional process based on the points related to the constitution that are included in the basic principles paper.

“A purely unofficial technical wok that doesn’t produce a decision. This is the agreement,” he added.

Asked whether this round of Geneva talks on Syria focused about discussing the constitution basket only, al-Jaafari said “We haven’t discussed any basket yet.”

Earlier, the delegation of the Syrian Arab Republic held a session of talks with de Mistura at the UN HQ in Geneva in the framework of the sixth round of the intra-Syrian dialogue in the Swiss city.

Two sessions of talks were held between both sides on Tuesday, the first day of the round of talks, and another session of talks was held on Wednesday.

A meeting started between de Mistura and al-Riyadh opposition delegation at the UN HQ in Geneva at 1 p.m. (Damascus time).

The fifth round of the intra-Syrian dialogue wrapped up on March 31st where the delegation of the Syrian Arab Republic presented several papers throughout eight days to the UN Special Envoy to Syria, the first of which was on counterterrorism and another on general principles for a political so However, the platforms of the opposition did not reply to any of the papers.

The fourth round of the dialogue ended on March 3 where an agenda of four baskets including counterterrorism, governance, constitution and elections was agreed upon.