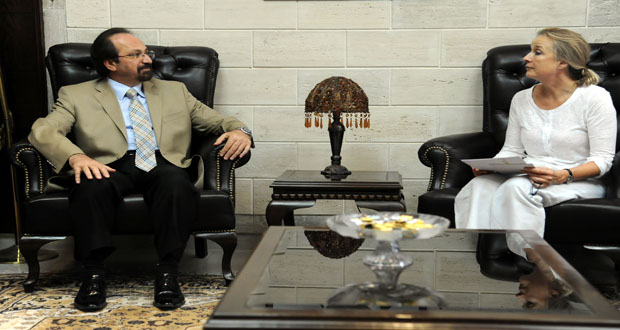 Al-Nayef called for coordination to send a medical shipment by air to Hasaka province, in addition to
delivering medicine shipments to Daraa, noting that the Ministry requested that the Health Directorate
in Hasaka provide all possible aid to Syrians and to Iraqis who took refuge in Syria due to the
escalating situation in their country.

He said that the success in delivering medical shipments to Moadamiyet al-Cham in Damascus
Countryside and to Aleppo must be replicated across all provinces.

In turn, Hoff presented al-Nayef with a letter of recognition from WHO Regional Director for the Eastern
Mediterranean Ala Alwan, in which he expressed appreciation for the Syrian government’s
cooperation with the WHO in reaching people who need health services and improving humanitarian
relief efforts.

Hoff said that the WHO is committed to working with the Syrian government and partners in the health
sector to access every Syrian citizen who needs services.