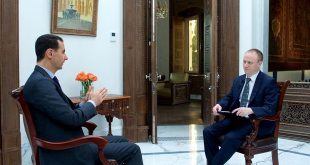 President al-Assad : Khan Sheikhoun incident fabricated..The West and the US blocked the investigation because it will find that all their allegations and narratives were lies 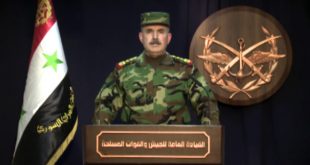 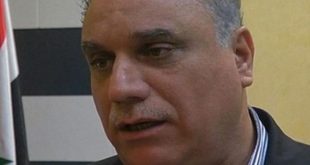 Damascus, SANA – The US carried out a missile strike against an air base in Syria’s Central Region at dawn on Friday, a military source announced.

“One of our air bases in the Central Region came at dawn today under a missile strike by the United States of America that causes losses,” the source said.

US President Donald Trump announced that the US launched an attack on a Syrian air base with a number of guided missiles.

“Tonight, I ordered a targeted military strike on the air field in Syria,” said Trump. “It is in this vital national security of the United States,” he added.

This U.S. attack followed the hostile media campaign launched by a number of countries leading the terrorist war on Syria upon the alleged chemical attack that happened in Khan Sheikoun town in the countryside of Idleb province.

On Tuesday, the General Command of the Army and the Armed Forces categorically denied that the Syrian Arab Army used chemical materials in Khan Sheikhoun.

The countries and regimes supporting the terrorists in Syria have always worked on fabricating facts and creating lies with the aim to invoke direct intervention in targeting Syrian sites after each defeat suffered by the terrorist organizations, which have recently been dealt severe blows in many areas in the countryside of Damascus, Palmyra, Deir Ezzor, Hama and Lattakia at the hands of the Syrian army and its allies.

The warplanes of the US.-led coalition have committed dozens of massacres against the Syrians in the countryside of Aleppo, Hasaka, Deir Ezzor and Raqqa, the latest being in al-Mansoura village in Raqqa last March which left dozens of civilians dead or injured.

Last September, four U.S. warplanes hit a site of the Syrian Arab Army in al-Tharda Mountain in the southeastern countryside of Deir Ezzor in support of ISIS terrorist organization, whose militants were able to take control of the Mountain following the
strikes

Damascus, SANA- Three citizens were martyred in an Israeli aggression Friday on some points to …