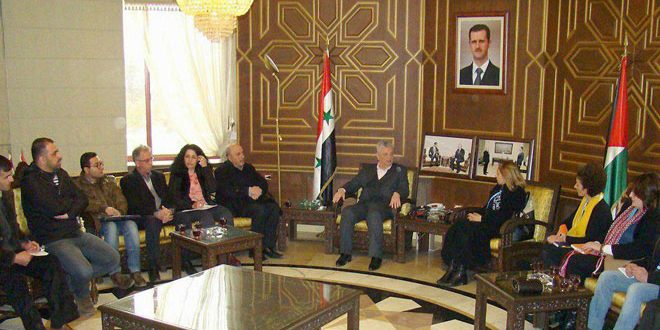 The main discussion was focused on the projects being carried out by the UN organizations in the fields of relief, health, water drinking, education and social and psychological support.

Director of the Southern Region Office of the World Food Program (WFP) Wissam al-Ahmad said the visit to Sweida came in the framework of following up on humanitarian and relief work and the projects implemented, or still in the process of implementation, in coordination with the local partners, in addition to touching upon the UN offices that have recently been opened in the province.

She noted that a number of meetings have been held with the directors of the departments of Agriculture, Water and Water Resources over the past period to study the implementation of a project to support 10 villages affected by drought in the southern part of Sweida.

Director of the office of the UN Refugee Agency (UNHCR) in Sweida said the Agency is working on a set of projects in the province, including societal initiative program through which 15 initiatives have been implemented in the cities of Shahba and Sweida, in cooperation with non-government organizations.

Work is underway for establishing societal centers in the cities of Salkhad and al-Quraya in the coming period that will target displaced families and civil associations, the director added.

Eng. Ahdab al-Mubayyed of the United Nations Children’s Fund (UNICEF) said the organization completed rehabilitation works at 17 schools in Sweida and is now waiting for a list of another number of schools that need to be rehabilitated.

She said a set of projects is waiting for the necessary funds that are mainly concerned with equipping drinking water wells in areas in the countryside of Sweida.

Al-Mubayyed pointed out that the UNICEF will supply the National Hospital of Sweida with four neonatal incubators during this week, referring to the organization’s efforts in support of the vaccination program in the province.

Aya al-Rifaei of the United Nations Population Fund (UNFPA) said the Fund has been providing reproductive health services in cooperation with local partners.

Muhannad Quteini of the International Organization for Migration (IOM) said the organization is working on an emergency plan and on implementing psychological support and livelihood projects, noting that 300 wheelchairs were distributed to people with movement disabilities in Sweida in cooperation with the Syrian Arab Red Crescent and a number of non-governmental organizations.