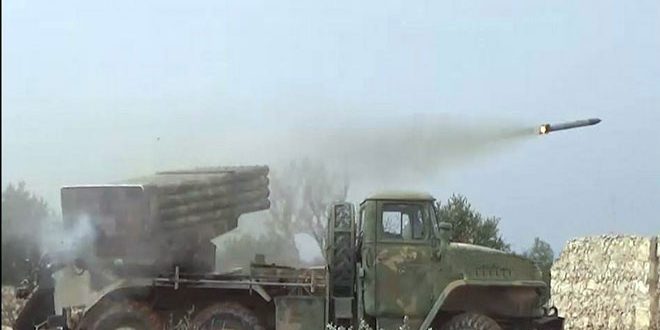 Provinces, SANA – Army units operating in the eastern countryside of Homs established control over a number of hills in Jahar area after eliminating the remaining ISIS gatherings there.

SANA reporter in Homs said that army units, in cooperation with the allied and supporting forces, carried out during the past few hours a swift military operation in which they established control over a number of strategic hills surrounding Jahar gas station to the northwest of Tadmur (Palmyra) city.

The reporter added that a number of vehicles and various kinds of ammunition were destroyed as a result of the operation. A number of ISIS terrorists were killed and others were injured, while the rest of them fled towards the wells area leaving behind their arms.

The reporter pointed out that the army units achieved new advance in their operations in al-Bayarat area to the west of Palmyra city, retaking new sites to the south of al-Bayarat after inflicting heavy losses upon ISIS terrorists there.

An army unit carried out a military operation targeting an ISIS gathering to the west of Deir Ezzor Airport .

SANA reporter in the province said Sunday that the army destroyed a machinegun and eliminated most of the ISIS group’s members in the surrounding of Liwa al-Taamin, to the west of Deir Ezzor Airport.

Army units clashed with Jabhat al-Nusra terrorists who launched attacks against the locals’ houses and military points in al-Manshiyeh neighborhood in Daraa al-Balad area in the southern province of Daraa.

SANA reporter said the army units confronted the assault that was launched from various directions towards the southeastern part of al-Manshiyeh neighborhood.

The reporter pointed out that the terrorist organizations targeted in parallel with their assault with artillery, mortar shells, home-made Jahannam (hell) cannons and heavy machineguns the residential buildings in al-Manshiyeh neighborhood, claiming two lives and injuring several people%2.

Later, the reporter added that an army unit destroyed two booby-trapped vehicles for terrorist organizations to the southeast of al-Manshia neighborhood.

Members of the popular defense groups thwarted two machine gun fire attacks launched by ISIS terrorists on civilians in the surroundings of Barek village in the northeastern countryside of Sweida.

SANA reporter in Sweida explained that terrorists driving a vehicle equipped with a 23 mm machine gun to the west of Tal Saad opened fire on a number of shepherds to the north of Barek village on Sunday morning with the aim to kill them and steal their cattle.

He added that members of a popular defense group positioned in the area responded to the fire source, hitting the target directly.