President al-Assad to Shamkhani: We will continue work, with our friends, to create conditions for a solution 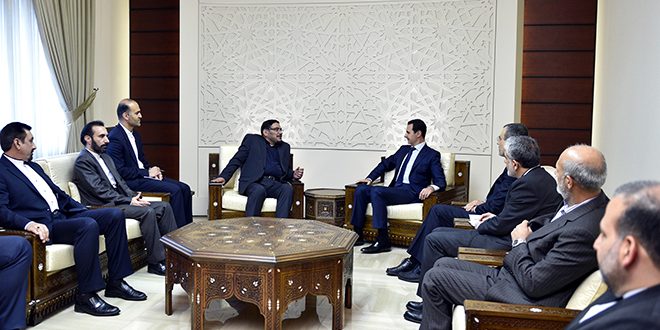 Both sides stressed during the meeting the determination of Syria and Iran to continue boosting their strategic relations, especially in light of the current terrorist war waged against Syria.

President al-Assad considered that freeing Aleppo from the grip of terrorists is an important point towards achieving victory in the war imposed on Syria, noting however that the coming stage is not going to be an easy one as the West and its tools and agents in the region continue providing support to the Takfiri terrorist organizations.

He affirmed that Syria, with the help of its friends mainly Iran and Russia, will continue doing all that is necessary to create the favorable conditions for finding a solution by which the Syrians are able to determine their country’s future without any foreign interference. Shamkhani, for his part, expressed his congratulations to President al-Assad and the Syrian people on the achievement in Aleppo, stressing that Iran will spare no effort to help further consolidate the steadfastness of the Syrians because it considers that defeating the terrorist plot and its backers is a decisive issue not just for Syria but also for all the peoples of the region who seek peace and security and want to draw up their countries’ future.

Following his talks with President al-Assad, Shamkhani later met with Head of the National Security Bureau Ali Mamlouk, and both sides discussed the standing close cooperation between their two countries, especially regarding the war against the terrorist organizations. Shamkhani and Mamlouk agreed to build on what has been achieved over the past period to reach towards eliminating terrorism from every inch of the Syrian soil.