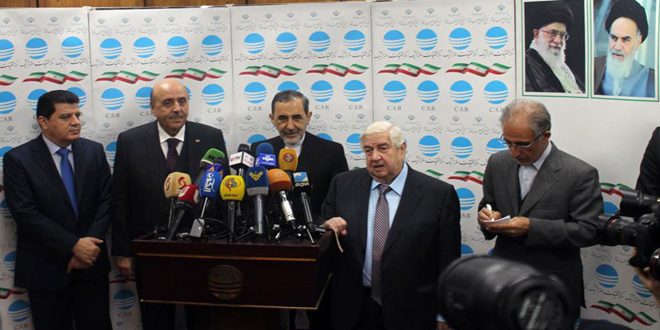 Tehran, SANA – Deputy Prime Minister, Foreign and Expatriates Minister Walid al-Moallem said that the victory in Aleppo and the liberation of the city from terrorists is a joint victory for Syria and Iran, and that the cessation of combat activities is a preliminary step towards Syrian-Syrian dialogue without foreign interference.

In a statement on Saturday following a meeting with Advisor to the Leader of the Iranian Revolution for International Affairs Ali Akbar Velayati, al-Moallem stressed the need for armed groups to isolate themselves from Jabhat al-Nusra and ISIS. The Minister expressed appreciation for Iran’s support for Syria, and that talks focused on the importance and of Syrian-Iranian-Russian coordination and consultations and their success in achieving victory in Aleppo and across Syria.

For his part, Velayati said that the victory in Aleppo is a victory for the resistance front, and that the political solution is the only solution for the crisis in Syria, adding that Syrian-Syrian dialogue must be held without foreign interference.

He also underlined the role of Syrian-Iranian-Russian cooperation in fighting terrorism and restoring security and stability to Syria in the region, adding “I hope that the Syrian friends will consider Iran their second home. As Iran had long-term strategic relations with Syria in the past which started in the time of late President Hafez al-Assad, these relations will continue in the future.”

Al-Moallem also met Speaker of the Iranian Shura Council Ali Larijani and discussed with him bilateral relations and the importance of developing them in all fields, in addition to discussing developments in the region and the world. He expressed Syria’s appreciation for Iran’s support, affirming that Syrians will never forget it, adding that the victory in Aleppo has led to the cessation of combat activities in Syria which should pave the way towards political dialogue.

The Minister asserted that the Syrian government will participate in the meeting in Astana, in addition to underlining the need to boost Syrian-Iranian coordination to confront the malicious role played by some regional states that support terrorists.

For his part, Larijani congratulated the Syrian people and leadership over the victories achieved against terrorists in Aleppo and other areas, hoping that security and stability will return to Syria and that it will triumph over terrorists and their backers.

He affirmed that Iran will continue supporting Syria and that the longstanding relation between the two countries will continue.