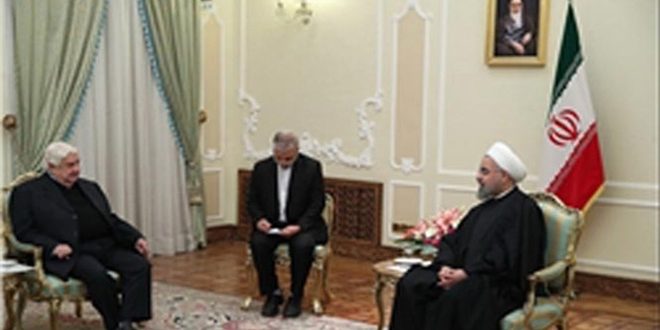 Minister al-Moallem relayed to President Rouhani the greetings of President Bashar al-Assad, and discussed with him means for bolstering the strategic relations between the two countries, in addition to discussing developments in Syria and the region, particularly the cessation of combat activities in Syria which was announced on Thursday and the upcoming meeting on Syria due to be held in Astana.

During the meeting, President Rouhani stressed that the Iranian leadership is committed to developing Syrian-Iranian relations in various fields, affirming that Iran will continue supporting Syria in the battle against terrorism until victory is achieved and peace and stability are restored to the entirety of Syria.

Rouhani lauded the steadfastness and resistance of the Syrian people in the face of terrorism and its supporters, congratulated the Syrians over the victory in Aleppo, and emphasized that Syria’s future will be decide by the Syrians without any external interference.

The Iranian President asserted the importance of maintaining the Iranian-Syrian-Russian coordination on counter-terrorism, asking al-Moallem to relay his best wishes and greetings to President al-Assad and to the Syrian people.

In turn, al-Moallem affirmed the strength of Syrian-Iranian relations as the two countries share mutual vision, interest, and fate, reiterating Syria’s commitment to boosting these relations in all fields.

He also voiced Syria’s appreciation of the support provided by Iran in the battle against terrorism in light of the siege and economic sanctions imposed on it, underlining the importance of coordination and consultations between the two countries, especially in this important stage following the victory in Aleppo.

Before the meeting, al-Moallem held an official talks session with Iranian counterpart Zarif during which they discussed the strong bilateral relations and means for developing them as well as developments in Syria and the region, and the two sides’ viewpoints were matching in all matters that were discussed, and after that an expanded meeting was held which included a number of military officials from both sides, during which they discussed the situation on the ground following the cessation of combat hostilities agreement.

In addition, al-Moallem also met during his visit to Tehran Secretary of the Supreme National Security Council of Iran Ali Shamkhani, discussing with him bilateral relations, briefing him on the developments following the victory in Aleppo, and voicing appreciation for Iran’s support for Syria.