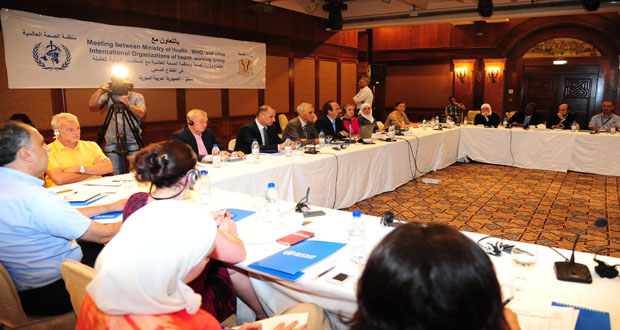 Damascus, SANA – Caretaker Health Minister Dr. Saad al-Nayef stressed the need to enhance cooperation with international organizations to meet Syrians’ health needs, particularly those who were affected by the crisis.

During a meeting on Sunday with representatives of international organizations operating in Syria, al-Nayef called on these organizations to provide more support by supplying medicine and equipment that are difficult to procure due to the unjust sanctions imposed on Syria.

He also reviewed the impact of terrorist attacks on the health sector in Syria, which claimed the lives of 202 health sector workers and wounded 241 others, while 39 workers have been kidnapped.

In turn, resident representative of the World Health Program (WHO) Elizabeth Hoff said that Syria made considerable strides in various health issues, particularly polio vaccination, adding that the WHO is working alongside the Health Ministry to improve health services and that there is a plan for providing medical services and equipment for Syrians in the eastern areas.