The army destroys a car bomb for ISIS in Homs countryside 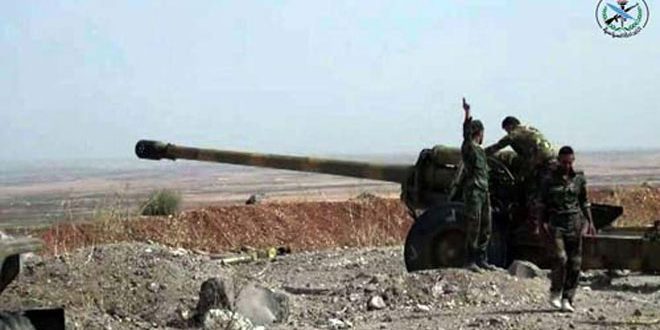 Provinces, SANA-Units of the army and armed forces on Wednesday continued their military operations against armed terrorist groups in different Syrian regions, killing a number of terrorists and destroying their equipment.

The army units targeted the gatherings and movements of ISIS near T-4 region and Sharifa village in Homs eastern countryside.

The army’s operation ended up with destroying a car bomb for the terrorists in the surrounding of al-Katibah al-Mahjourah and killing several terrorists.

Meanwhile, a unit of army eliminated members of a terrorist group and destroyed their weapons in the surrounding of Borj al-Hayat village in Lattakia northern countryside.

The army and armed forces units carried out accurate operations on gatherings and fortified positions of Jabhat al-Nusra-linked terrorist groups in the eastern countryside of Daraa Province.

A military source said that the army units destroyed a command center with all terrorists inside it about 10 km west of Said bridge and a rocket launcher pad in al-Nu’aimeh town in Daraa eastern countryside.