Al-Moallem: Conspiring against Syria hasn’t stopped, but it will not dissuade us from fighting terrorism 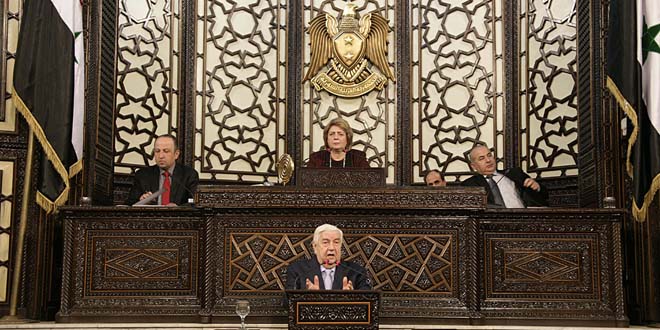 Damascus, SANA – The People’s Assembly held a session on Wednesday in which Deputy Prime Minister, Foreign and Expatriates Minister Walid al-Moallem gave a presentation on the latest developments on the Arab and international arenas.

For his part, Minister al-Moallem affirmed the importance of accentuating the victories of the Army and Armed Forces in Aleppo, saying that Aleppo will return and within a few days its liberation from terrorists will be announced.

Al-Moallem said that conspiring against Syria hasn’t stopped; rather it became fiercer during the battle in Aleppo due to the conspirators’ fear for their proxies like Jabhat al-Nusra, Nour Eddin al-Zenki Movement, and Ahrar al-Cham, adding “regrettably, this is what the Western world is like, but that will not dissuade us from continuing to fight terrorism until every inch of our beloved Syria is liberated.”

He noted that many of the leaders of the states that conspired against Syria didn’t sleep last night out of their worry for the remaining terrorists in the eastern neighborhoods of Aleppo who now are located in less than 2% of the city’s area.

“Yesterday, there was a Security Council meeting, and those who followed up on it will come out with one conclusion, which is that it was a carnival of lies in all sense of the word,” the Minister said, adding that Ban Ki-moon was “concerned” as usual and participated in the misdirection campaign along with the representatives of America, France, Britain, and others.

Al-Moallem added that it’s weird that Netanyahu too is concerned about Aleppo’s people along with the Saudi King who asked his foreign minister to hold an emergency UN General Assembly session regarding the fate of the people of Aleppo, affirming that this proves the collusion between these sides in conspiring against Syria.

“30 thousands of our people in the neighborhoods of western Aleppo were killed and injured by the arbitrary shelling by terrorists, while the leaders of conspiring countries were sleeping peacefully. The Foreign Ministry sent more than 540 letters to the Security Council to document these terrorists crimes, and no-one talked about them,” he went on to say.

The Minister said that terrorists set up a “local council” in eastern Aleppo whose head was touring Europe, and de Mistura wanted that man to be assigned to manage the affairs of eastern Aleppo, which would have constituted a reward for terrorists, adding that while some were shedding crocodile tears over the lack of food in eastern Aleppo, it was revealed that were stockpiles in each neighborhood that locals couldn’t access unless they pay black market prices, and there were also weapons and munitions depots, facilities for manufacturing explosives and shells, and countless tunnels, cellars, and fortifications.

“They conspired blatantly with ISIS; they even helped it to return to Palmyra in order to disrupt and muddle the victories of the Syrian Arab Army in Aleppo and deprive the Syrians of the joy of victory, but no-one can block out the sun,” he said, affirming that the victory in Aleppo is historic and will change the face of the crisis in Syria and the region.

Al-Moallem affirmed that Palmyra will be liberated sooner rather than later, affirming the importance of the reconciliations achieved recently in al-Tal area and before it in Khan al-Sheeh, Daraya, al-Moadamiya, and other areas.

In response to comments from Assembly members, al-Moallem said that the Turkish foray into northern Syria is an aggression against the Syrian sovereignty, and all the appropriate measures will be taken it to repel it, adding “we are currently waging a fierce battle against the pawns of Erdogan’s regime in Syria, particularly in Aleppo, as all the extremist terrorist organizations in it received instructions from the Turkish intelligence.”

He affirmed that Syria will not permit a single Turkish soldier to remain in its territory.

Regarding the Israeli attacks on Syria, al-Moallem said that there’s a clear relation between terrorist organizations like al-Nusra in southern Syria and the Israeli entity, and that they seek to create a “safe cordon” like what happened in southern Lebanon, affirming that Syria will not allow that to happen.

The Minister said that some Arab and regional states exploit the issue of Syrian refugees to serve their own agendas, preventing them from returning to Syria and limiting their liberties and movement in order to exploit their issue, reiterating that Syria welcomes all displaced people.

Regarding reconstruction, al-Moallem said that there are two ways to speed up this process: one is to go to the West and the World Bank and fulfilling their conditions which would harm Syria’s independent decision-making and sovereignty, and the other is by cooperating with friends and relying on local resources and capabilities.