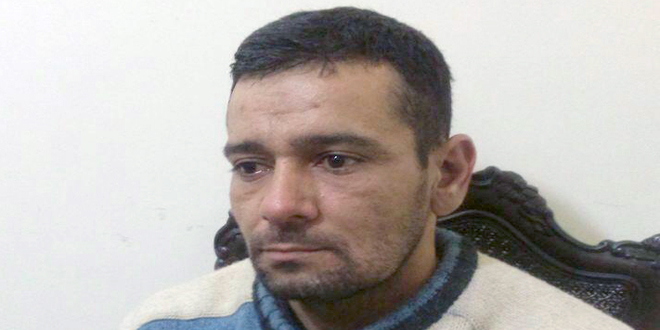 Aleppo, SANA – Terrorist Yousef Fahd Deeb admitted that terrorists executed scores of civilians in the public squares and streets of Aleppo’s eastern neighborhoods under flimsy pretexts in order to terrorize and pressure locals.

Deeb, who was arrested by the Syrian Arab Army as he was trying to blend in among civilians exiting the eastern neighborhoods of Aleppo, said that he was the head of the “sharia tribunal” office of al-Jabha al-Chamiya terrorist organization, and that many of the terrorists who came to the tribunal were foreigners from Turkey, Chechnya, Libya, Egypt, and Tunisia.

The terrorist acknowledges that Turkey is the main source of funding and arming for terrorist organization, as they received enormous sums of money in US Dollars, and that the heavy weapons used by the terrorists – including the tanks, vehicles, and heavy machineguns – were used by militants from Qatar, Saudi Arabia, and Qatar.

Deeb said that Jabhat al-Nusra was the main organization in the eastern neighborhoods along with al-Jabha al-Chamiya and Nour Eddin al-Zenki Movement, and that the relationship between these groups was in disarray.

He went on to confess that these organizations prevented locals from leaving by force of arms and opened fire at them, although the organizations’ leaders had smuggled their own families to Turkey beforehand.

Deeb said that the “sharia tribunal” sentenced 25 civilians to death under various pretexts, and that the terrorist organizations intentionally carried out these executions by gunfire in crowded public squares to terrorize and intimidate locals.

He went on to say that the terrorist organizations prevented him from leaving the neighborhoods, but eventually he and his family managed to escape via Karm Homad neighborhood near Bab al-Nairab.