Conference on means to preserve Syrian heritage held in Damascus 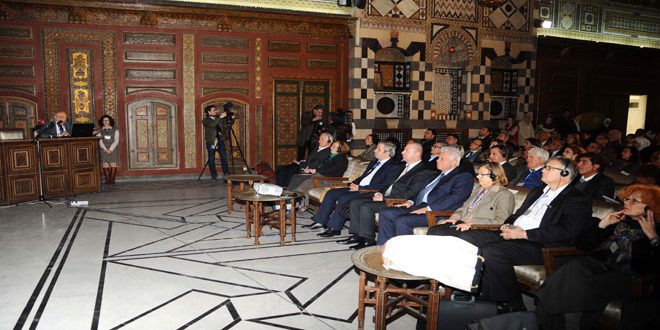 Damascus, SANA – More than 20 foreign professors, researchers and archaeologists who worked in Syria participated in the scientific conference entitled “New visions and proposals to revive the Syrian heritage” which kicked off Saturday at the Damascene Hall at the National Museum in Damascus.

The conference is organized by the Directorate-General of Antiquities and Museums, in cooperation with Iconem – a French company specializing in the 3D digitization of unique and vulnerable archaeological sites.

Director General of Antiquities and Museums Dr. Maamoun Abdul-Karim said that convening this conference coincides with the continuous endeavors to obliterate Syria’s civilization, culture and identity through vandalizing archaeological sites, the looting and smuggling of cultural heritage properties, not to mention the terrorist attacks on historic building and monuments.

He underlined the directorate’s keenness, since the very beginning of the terrorist war on Syria, on participating in international forums and meetings to convey the reality of what is taking place in the country and the systematic terrorism which targets Syria’s culture and heritage, the best evidence on which is the ISIS destruction of the ancient city of Palmyra.

Abdul-Karim highly appreciated the efforts exerted by the Directorate’s workers across the Syrian provinces to rehabilitate the terror-affected archeological sites.

Assistant Tourism Minister Mohammed Rami Martini said that the terrorist attacks on archeological sites and monuments reflected negatively on tourism, adding that the Ministry has launched the “I Belong” Initiative to support human heritage and face the takfiri obscurant mentality and stress Syria’s messages of peace and amity.

Chairman of the Working Group for Safeguarding Cultural Heritage in Syria and Iraq the International Council on Monuments and Sites (ICOMOS), Samir Abdul-Haq, reviewed the group’s achievements since 2013 and its efforts to study the damage caused by terrorists’ sabotage and vandalism acts of archeological heritage in Syria and Iraq.

He stressed that the group will continue to organize workshops, courses and symposiums inside Syria and abroad to preserve and document Syrian heritage using the latest technologies such as the 3D technique.

On the sidelines, a photo exhibition was inaugurated. It showcased  24 3D and photogrammetric images of  different Syrian archeological sites such as the Umayyad Mosque in Damascus, Qal’at Salah El-Din, Jablah amphitheatre, the Royal Palace of Ugarit in Lattakia, Temple of Bel, Arch of Triumph and other monuments of the ancient city of Palmyra  Aleppo Castle, Aleppo Great Mosque and the Old City of Aleppo, Arwad Castle, Temple of Amrit, al-Marqab Castle, Chastel Blanc, the gate of Suleiman Fortress in Tartous, Crac des Chevaliers in Homs and Masyaf Castle in Hama.

It also included photos for members of the joint archeological missions with Italian, French and Polish teams at several archeological sites in Syria and the restoration works performed to preserve found antiquities and pottery

In a statement to SANA, Director of Museums Affairs at the Directorate-General of Antiquities and Museums, Ahmad Deib, highly appreciated the efforts exerted by foreign researchers and archaeologists who worked in Syria and their contribution to studies and restoration works carried out to protect Syria’s archeological monuments destroyed during the years of current war.

Conservator and archaeologist, Bartosz Markowski, from the Polish Centre of Mediterranean Archaeology of the University of Warsaw, expressed hope that this conference would be a starting point for a series of future meetings that focus on preserving Syria’s heritage which has been greatly affected by current circumstances.