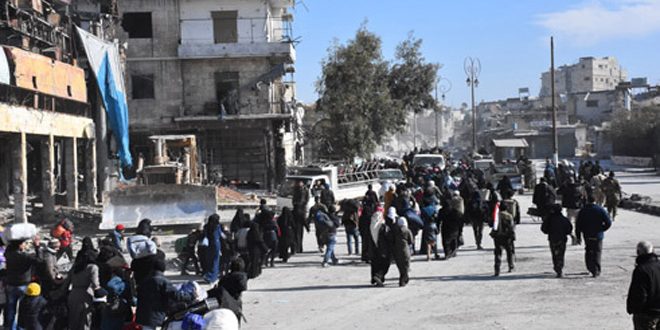 Aleppo, SANA-Hundreds of civilians exited the eastern neighborhoods of Aleppo city via the humanitarian corridors opened by the Syrian Arab Army in cooperation with the Russian side.

SANA reporter in Aleppo said that since Friday morning until afternoon, at least 4000 civilians managed to escape the grip of Takfiri terrorist organizations positioned in the neighborhoods of al-Sukkari, al-Firdous and Salah Eddien in the eastern part of Aleppo city.

The reporter pointed out that army units and the authorities concerned in Aleppo Governorate immediately moved civilians from army’s points in al-Azizia, Bab al-Nirab and Bab al-Hadid towards Jibrin area where the governorate prepared temporary residential centers to accommodate thousands of citizens and equipped them with all necessary services.

He added that the medical staffs offered all health services for wounded persons and patients and transported them to medical points and hospitals.

Although the Syrian Arab Army has secured the exit of thousands of civilians from the eastern neighborhoods of Aleppo city in recent days, terrorists are still holding hundreds of families hostages in the neighborhoods of al-Sukari, al-Ansari, al-Firdous and parts of Salah Eddien and al-Sheikh Said.