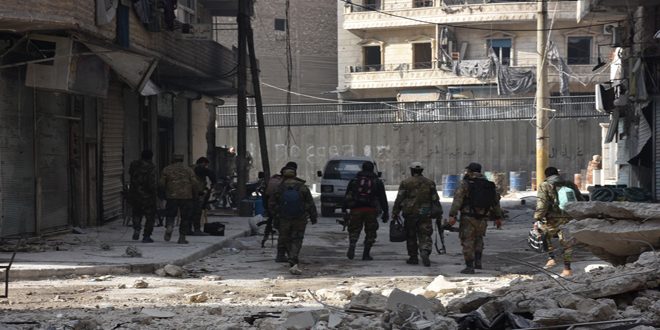 Provinces, SANA – The army has intensified its military operations against terrorist organizations in Aleppo, in cooperation with the supporting forces, restoring security to several neighborhoods in Aleppo city over the past 24 hours.

A military source announced that army units, in cooperation with allied forces, restored security and stability to a number of neighborhoods in eastern Aleppo.

The source pointed out that army units carried out operations against the gatherings and fortified positions of terrorist organizations in which full stability and security were restored to the neighborhoods of Bab al-Hadid, Jadit al-Khandak, al-Hamideh, Qadi Askar, al-Mashatia, Karm al-Jabal and the streets of Nour Eddin al-Zanki and Bab al-Nassr in Aleppo city.

The source added that the army’s engineering units are combing the above mentioned areas to dismantle the explosive devices and mines which were planted earlier by terrorists in the streets and squares.

Later, the source said that army units, in cooperation with the allied forces, continued advance in the eastern neighborhoods of Aleppo and restored stability and security to the neighborhoods of al-Jadida, al-Farafira, Aqil, Qastal al-Harami, Beit al-Qanas and al-Salihen. SANA reporter said that army units secured the exit of new batches of the families who were besieged by terrorist organizations in east of Aleppo.

Late Tuesday, the reporter said that the army units, in cooperation with the supporting forces, restored security and stability to the neighborhoods of Aghiour and Bab al-Hadid in Aleppo city, while others secured departure route for more than 200 civilians and captured a number of terrorists.

Earlier on Tuesday, the army also restored security to the neighborhoods of Karm al-Dada, Karm al-Qatirji, al-Shaar, al-Marjeh and al-Sheikh Lutfi in Aleppo city and Tallet al-Shurta (hill) to the east of Aleppo.

An army unit targeted gatherings and movements of ISIS terrorists in al-Qassr village, about 40 km northeast of Sweida city in the southern Sweida province.

A military source told SANA on Tuesday that the army operation left a number of terrorists dead or injured, in addition to destroying two cars for them.