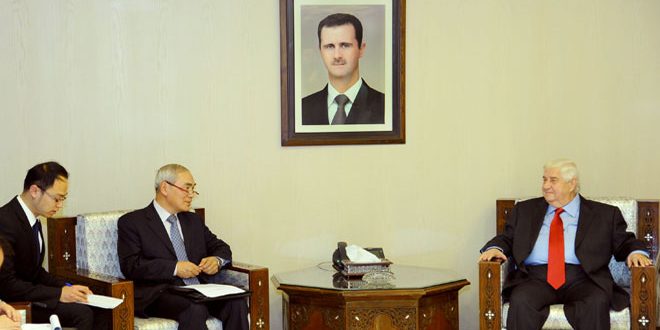 During the meeting, the two sides reviewed the bilateral relations between Syria and China and the latest developments in Syria and the region, mainly the efforts to combat terrorism and reach a political solution for the crisis in Syria.

Al-Moallem stressed the importance of enhancing and developing relations between Syria and China in all fields, thanking China for the assistance it provided to Syria which has contributed to alleviating the suffering of the Syrian people against the terrorist war and unjust economic sanctions which have affected the Syrian economy and infrastructure.

The minister also briefed the delegation on the latest developments in the battles waged by the Syrian Arab Army and allied forces, especially in the city of Aleppo, against the armed terrorist groups, affirming that the Syrian government will continue its efforts in combating terrorism and voicing confidence in its ability to win in parallel with the efforts to meet the needs of Syrian citizens and to reach a political solution for the crisis in Syria through Syrian-Syrian dialogue, led by Syria, without external interference.

The minister stressed the need for synchronizing the international community’s efforts to fight and eliminate terrorism, underlining the importance of obliging the countries which sponsor terrorism, on top of them Turkish, Saudi and Qatari regimes to respect the United Nations Security Council counterterrorism resolutions.

Al-Moallem also praised the principled positions of China in international organizations and the close coordination between the two countries on the international arena, expressing his gratitude for China and the Russian Federation for using the right of veto at the UN Security Council against a draft resolution on a truce in Aleppo that did not stipulate the exit of militants from the eastern part of the city.

In turn, the Chinese Envoy reiterated China’s call for restoring security and stability to Syria, hoping that a progress will be achieved in the efforts to reach a political solution through the resumption of dialogue between the Syrians themselves. 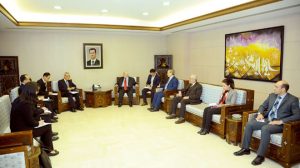 The Envoy noted that his country will continue to play a constructive role for the settlement of the crisis in Syria in coordination with the Syrian side and its willingness to deepen bilateral cooperation in all fields.

He appreciated the efforts exerted by the Syrian government in combating terrorism and expressed his confidence that it will achieve victory over terrorism, stressing the importance of continued fight against terrorism which is hindering the political solution.

He called for an “iron fist” approach against terrorist organizations without discrimination and wherever they are positioned as “terrorism is a common enemy of mankind and it should not be exploited to forward special agendas.”
Deputy Foreign and Expatriates Minister Dr. Fayssal Mikdad also met the Chinese Envoy and his accompanying delegation.

The two sides discussed during the meeting the situation in Syria and the relations between the two friendly countries.

Mikdad affirmed Syria’s high appreciation for the stances of China which represent the aspirations of Syrian and Chinese people who seek to achieve the elimination of terrorism and restore security and stability to Syria.

For his part, Xiaoyan affirmed that his country stands alongside Syria in its war on terrorism, pointing to China’s exerted efforts through contacts and visits to a number of countries to find a solution for the crisis, citing its positions in international forums, especially the UN Security Council.

In the same context, Minister of State for National Reconciliation Affairs Dr. Ali Haidar affirmed that China’s stances towards Syria contributed to enhancing the steadfastness of the Syrian people and alleviating their suffering from terrorism.

Haidar, meeting the Chinese Special Envoy for Syria and the accompanying delegation, said that the achievements of Syrian Arab Army and the accelerated pace of local reconciliations will pave the way for pushing the political process forward, pointing out that the reconciliation project encounters a fierce attack by countries hostile to Syria, as reconciliation opposes their agendas.

In turn, Xiaoyan reaffirmed his country’s support to the Syrian people and Beijing efforts to find a political solution that preserves the sovereignty of Syrian state and its independence, hoping Syria would achieve more progress on the political and military levels against terrorism.