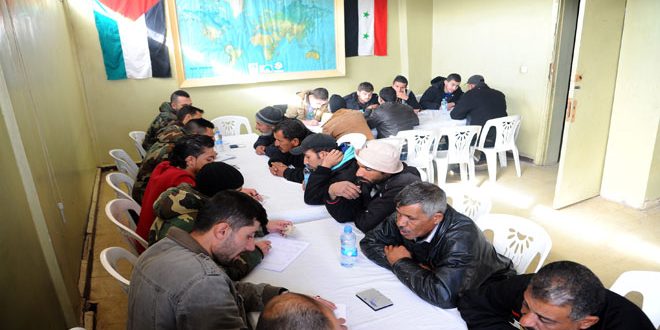 Damascus Countryside, SANA – In the framework of local reconciliations in the southern countryside of Damascus , 700 persons from al-Tibeh, al-Keswa, and al-Meqlaibeh towns have had their legal status settled in accordance with the Amnesty Decree no.15 for 2016. SANA’s correspondent pointed out that among those who have settled their legal status were 150 gunmen who turned themselves in to the authorities, handed in their weapons, and pledged not to take part in any act that may harm the country’s security and safety.

In a statement to journalists, Damascus Countryside Governor Alaa Ibrahim said that the Governorate is working in coordination with concerned authorities to implement local reconciliations in all areas in preparation for the return of state institutions and locals who were displaced from their homes due to terrorism to those areas, pointing out that Damascus Countryside will be clear of weapons and gunmen very soon. For his part, chairman of al-Keswa City Council Abdul-Aziz al-Asfar pointed out that the first stage of settling the status of gunmen and wanted persons started on Monday in the areas of al-Keswa, al-Tibeh and al-Meqlaibeh and its affiliated towns of al-Mara, al-Maaleh, Ayn al-Bida and al-Thawra, adding that as of Tuesday all persons who have had their legal status settled are free to return to their normal lives.

One of the Syrian Arab Army officers said that as part of the local reconciliation process and settling the legal status of gunmen in al-Keswa area, a variety of weapons have been turned in today including machineguns, heavy machineguns, rifles, explosive devices of various sizes and weights, grenade launchers, RPG launchers, an anti-tank missile, an explosive belt, and hand grenades.