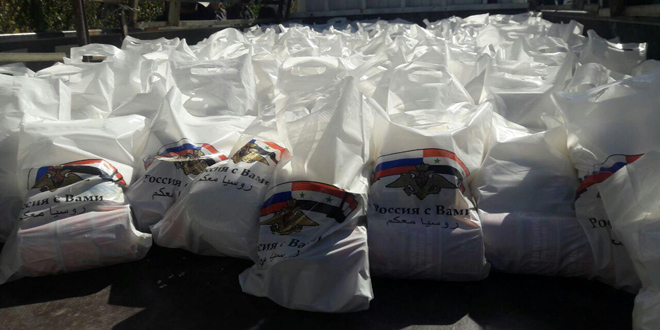 Quneitra, SANA – A new batch of food aid provided by the Russian Federation was distributed on Monday among the families of martyrs, wounded persons, and needy families in Khan Arnaba town in the southern province of Quneitra.

The families expressed their appreciation to the Russian leadership and people for their support, affirming that they stand side by side with the Syrian Arab Army in its war against terrorism.

In turn, Quneitra Governor Ahmad Sheikh Abdul-Qader hailed the steadfastness and the sacrifices of the families of martyrs and wounded persons.

For his part, Representative of the Russian Coordination Center in Hmeimim Alexei Ivanov pointed out that this aid is provided by the Russian government and people to the people of Syria to alleviate their daily burdens, hoping that security and stability will return to Syria soon.

aid Khan Arnaba Quneitra relief Russia Russian aid 2016-11-28
ghossoun
Share
Previous Foreign Ministry: Qatar’s statements on its constant support to terrorists prove it to be a reservoir of extremism and terrorism
Next Aleppo Governor Hussein Diab: Syrian Arab Army unit, in cooperation with supporting forces, establish control over Sleiman al-Halabi water station, technicians enter the station to begin repairs in order to bring it back online as soon as possible.