Russian Defense Ministry: Russian Air force operating in Syria equipped with all that is required to fight terrorism 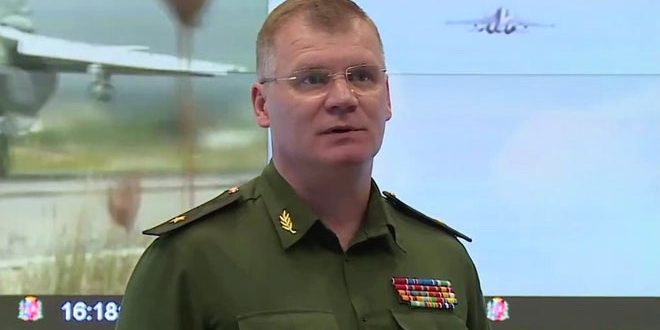 Moscow, SANA-Russian Defense Ministry reaffirmed on Thursday that its air force which is participating in the war against Takfiri terrorism in Syria under a request of the Syrian government is equipped with all that is required to fight terrorism.

In a statement published by RT website, Igor Konashenkov , spokesperson for the Russian Defense Ministry, said that the US State Department call for not providing fuel for Russian tankers represented an attempt to hamper Russian Aerospace Forces’ s efforts to fight international terrorism in Syria.

Konashenkov pointed out that the US has taken previous measures against Russia in regard to dealing with the organizations of ISIS and Jabhat al-Nusra where it deliberately delayed negotiations and declined to separate the opposition from the terrorists, and failed to deliver on its promises to provide information on the whereabouts of gunmen.

US State Department spokesman Mark Toner called countries in the region to refrain from supplying tankers that supply the Russian Air Force in Syria with fuel.
Konashenkov said the US call was intended to conceal the failures of the US policy in a way or another in Syria since 2014, pointing that combating international terrorism in Syria has never been the goal of the outgoing US administration.

He added that the Russian military operation managed in one year to achieve what the international coalition led by the US can achieve only in dreams, pointing out that thanks to the Russian operation, more than 2000 residential areas were restored and 86 armed groups stopped hostilities in addition to the return of hundreds of thousands of Syrians to their homes in various parts of the country.