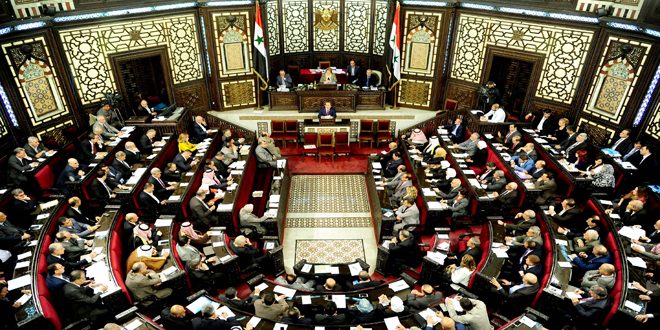 Damascus, SANA-People’s Assembly discussed on Sunday during its session, headed by Speaker Hadiyeh Abbas, the performance of Health Ministry and issues related to its work.

The MPs underlined the necessity of rehabilitating hospitals, medical clinics and health centers in the areas to which the Syrian Arab Army restored stability and security, and providing all medical supplies, equipment and medicines, particularly for chronic diseases.

For his part, Health Minister Dr. Nizar Yazigi affirmed that the health sector in Syria is steadfast despite the crisis and the unilateral measures imposed on the Syrian people.

He pointed out that the ministry transformed the polyclinics in the city of Homs into a hospital provided with 30 beds, adding that according to the reconstruction plan, this hospital will be equipped with 60 beds.

The minister added that the ministry rehabilitated Palmyra Hospital and allocated SYP 135 million to complete the repairing works in it.

The minister said that the number of hospitals that continue to work regularly and receive patients and urgent cases in all provinces is over 98, adding that 35 hospitals are working partially, in addition to 14 hospitals that were destroyed due to terrorist acts.

About chronic diseases’ medicine, the minister noted that the ministry enquires about the need for these medicines in all hospitals and sends a list of them to the Foreign Trade Establishment to import them before hospitals and health centers distribute them to patients