The army establishes control over Souran town in Hama 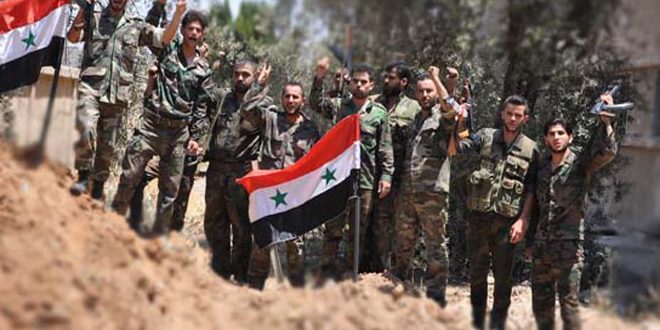 Provinces, SANA- Army and Armed Forces units, backed by the army air force, on Thursday continued to launch wide-scale military operations against dens and positions of the Takfiri terrorist organizations in different areas across the country, inflicting heavy losses upon them in the arms and personnel.

Army units, in cooperation with the popular defense groups, reestablished control over Souran town and the farms surrounding it in the northern countryside of Hama province, according to a military source.

The source added that the new military win came after army’s intensive operations on the gatherings and fortified positions of terrorist organizations in the area, in which the army killed large numbers of terrorists, injured many others and destroyed armored vehicles and 6 vehicles equipped with machineguns.

The source pointed out that members of army’s engineering units are combing the area to dismantle explosive devices and mines that were planted by terrorists to prevent the army from progressing.

Other army units destroyed three vehicles belonging to Jabhat al-Nusra terrorists and killed six of them in Tramla and to north of Mourek in the northern countryside of the province.

An army unit also killed one of the leaders of the so-called “Ahrar al-Sham Movement” terrorist Mohammad Abdul-Karim al-Haj Yasin in Kafr Zita town in the northern countryside of the province.

Army units carried out precise bombardments against gatherings and fortifications of the terrorist organizations in al-Nazihin Camp, al-Hamadin neighborhood, al-Arbain, to the north of the Meteorology Building, to the south of al-Masri Roundabout, to the west of al-Jmrouk al-Qadim and al-Abbasyia Bakery and to the east of Katakit building in Daraa al-Balad in Daraa southern province.

The military source told SANA that a number of positions and fortifications, a trailer of armored vehicles and a trailer equipped with a rocket launcher belonging to the terrorists were destroyed in the bombardments and scores of terrorists were killed and others were injured.

Army units eliminated most members of an armed terrorist group in Al-Yadoudeh in Daraa Province and destroy ISIS oil tanker to the east of Sha’af in the eastern countryside of Sweida Province.

The Syrian army air force destroyed positions and a number of vehicles belonging to the terrorist organizations in Kafr Sandou, Tardin and Dahret Tardin in the northern countryside of Lattakia coastal province.

Army units targeted the gatherings and dens of Jabhat al-Nusra and other terrorist groups affiliated to it in the villages of al-Wa’ra, al-Tota, Tal Abu al-Sanasil and al-Ghajar to the north of Homs city in Homs, killing and injuring number of terrorists