Nasrallah: Battle against terrorists in Aleppo is decisive for the entire region 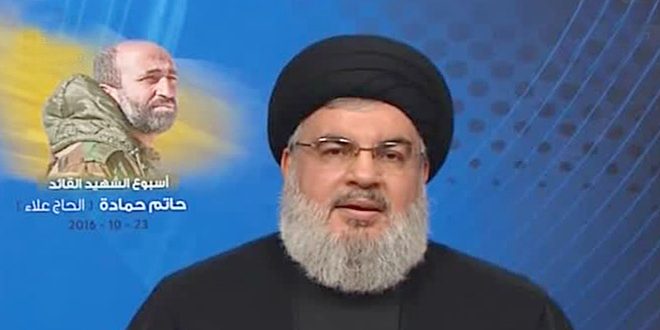 Beirut, SANA- Hezbollah Secretary General Sayyed Hasan Nasrallah affirmed on Sunday that the battle against terrorist organizations in Aleppo is decisive for the entire region just as the battle of Mosul in Iraq.

In a speech during an eulogy ceremony, Nasrallah pointed out that the terrorist crowds which were brought to Aleppo across the Turkish borders failed to achieve their goals in front of the victories of the Syrian Arab Army and its allies.

He said that the military and field results of this battle will have enormous repercussions on military, field and strategic levels and on the political solutions and the expectations of the various parties.

Nasrallah added that Hezbollah went to Syria in light of a full and thorough study, based on accurate analysis of the events in the region, noting that everyday horrible facts are revealed about who armed, financed and trained terrorists and bring them to Syria.

Hezbollah leader affirmed that the terrorist war on Syria exceeds the goals of targeting resistance axis to go beyond that and make existential and demographic changes in addition to changing the political map, formations of the border, composition of national entities, uprooting human groups in the region and erase everything related to the history of the region.

He added that the evidence on that is the existing documents and the behavior of ISIS, Jabhat al-Nusra and other terrorist organizations during the past years.