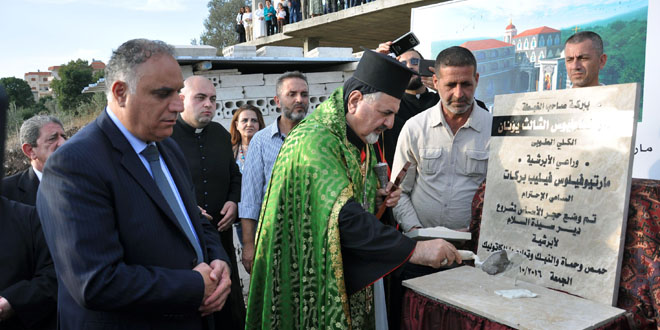 During the event, Patriarch Younan said that Syrians are peacemakers and committed to their homeland, and that they will rebuild their homeland and spread love and peace, adding that the goal of establishing the Convent is to bring Syrians together with the message of love and fraternity.

Participating in the event, Homs Governor Talal al-Barazi said it’s the destiny of Syrians to seek peace, work towards security and stability, and confront terrorism, pointing out to the government’s efforts to support Syrians to remain in their homeland and defend and rebuild it, adding that laying the foundation stone for the convent shows that Syrians will continue to build and will remain rooted in their land.

A number of figures who attended the event were honored.

The Lady of Peace Convent will be built on 700 square meters and will contain a number of structures and facilities including boarding rooms for 150 people.