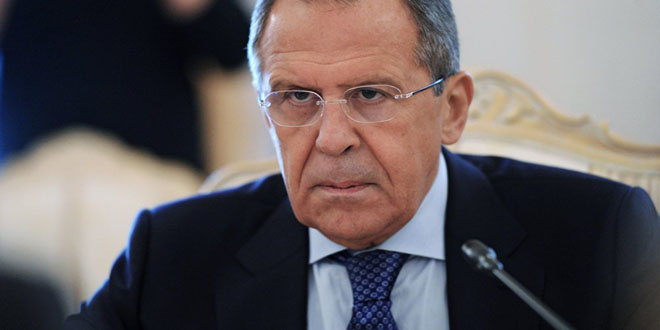 Moscow, SANA-Russian Foreign Minister Sergey Lavrov affirmed on Friday that the militants in Aleppo, including terrorists of “Jabhat al-Nusra” and “Ahrar al-Sham” are preventing civilians from exiting the eastern neighborhoods and hindering the delivery of aid.

In a press conference with his Guatemalan counterpart Carlos Raul Morales in Moscow, Lavrov said: “Russia is concerned that despite those goodwill gestures undertaken by Moscow and Damascus in regard to the situation in Aleppo seeking to normalize it, we see that militants of “Jabhat al-Nusra” and “Ahrar al-Sham” are refusing to leave the city.”

Lavrov said that both al-Nusra and Ahrar al-Sham, along other organizations cooperating with them, are ultimately sabotaging UN sabotaging the UN efforts which are supported by Damascus and Moscow, to deliver humanitarian aid to eastern Aleppo.

He also noted that those terrorists have been preventing the exit of civilians from eastern Aleppo, as well as blocking the exit of militants who had expressed readiness to respond to the call by the United Nations to leave the area.

Lavrov pointed out that Moscow is not surprised by Washington’s refusal to consider Jabhat al-Nusra as an enemy that must be targeted in Syria.

Lavrov expressed concern over statements about a Turkish aerial attack on Syria, stressing that the Syrian Arab Republic is a sovereign state, a member of the United Nations and has a full sovereignty over its airspace and territory.

In turn, Kremlin spokesman Dmitry Peskov announced that it is not unlikely to interrupt the humanitarian truce in Aleppo in the case of deterioration of the situation in it.

Peskov said that the situation in Aleppo is changing rapidly and all decisions about extending the humanitarian truce in the city will be made taking into account the situation on the ground.

About the option of extending the truce, he clarified that this issue is related to some facts, including the continuation of the exit process of militants from the city, how to ensure the security of humanitarian convoys, the possibility of militants continuing their offensive actions and if the truce will be exploited by terrorist factions.

Earlier, the Russian Security Council affirmed the importance of using the humanitarian truce in Aleppo to start the separation process of the moderate opposition from terrorists.