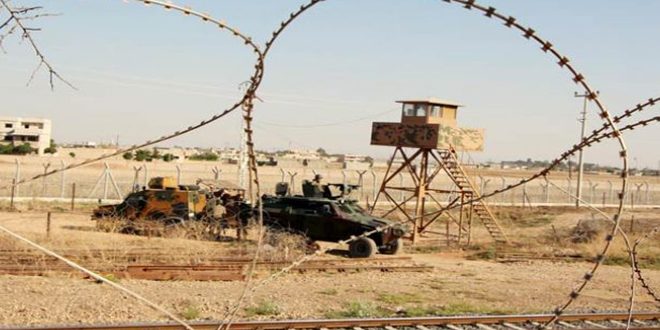 Aleppo, SANA – In a new act of aggression on Syria’s sovereignty, the Turkish regime’s forces penetrated into the Syrian territory on Saturday evening and attacked locals in two villages in the northern countryside of Aleppo.

Local sources in the region told SANA that a number of heavy vehicles, armored cars and troop carrier vehicles of the Turkish army crossed into Aleppo’s northern countryside and attacked Sourkeh village in Efrin area.

The Turkish army also targeted with medium weapons the locals in Deir Ballout village in Jindeiris area in northern Aleppo, according to the sources.

Identical local and media sources reported that the Turkish repeated artillery attacks on Deir Ballout village over the past period have forced a number of the residents, mostly women and children, to leave the village.

Last August, the Turkish regime violated the Syrian sovereignty by allowing tanks and armored vehicles to cross the border into Jarabulus city, a move that was strongly condemned by Syria through its Foreign and Expatriates Ministry.

Most recently, the Turkish forces transformed a school building in Jarabulus city into a hospital and hoisted the Turkish flag above it in another violation on September 28.

Turkey, which has had its border opened for mercenary terrorists coming from all corners of the world to cross into Syria and kill its people since the beginning of the crisis in the country, has recently repeated violations of Syria’s territory.

Turkey has been blatantly providing logistic and military support to the terrorist organizations fighting in Syria, including ISIS, which has all the while been supplying the Turkish regime with stolen oil, gas, antiquities and industrial facility equipment from Syria.