Two civilians killed, six others injured in terrorist attacks in Aleppo and Hasaka 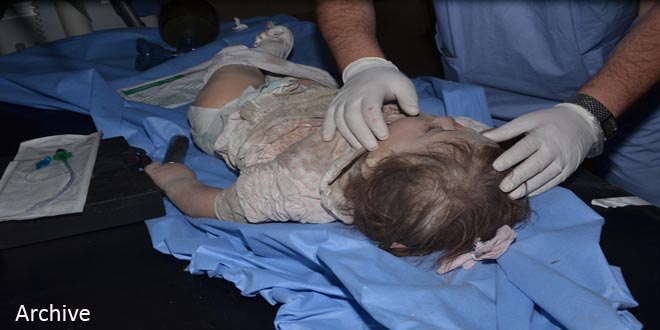 Hasaka/Aleppo, SANA-A girl was killed and three other persons were injured due to a terrorist rocket attack on the residential neighborhoods of al-Zahraa town in the northern countryside of Aleppo.

In a statement to SANA, a source at Aleppo Police Command said that terrorists fired a number of rocket shells on the residential neighborhoods of al-Zahraa town, killing a girl and injuring two women and another girl.

Civilian killed, three injured in a landmine explosion in Hasaka

A person was killed in a blast of a landmine planted by ISIS terrorists in al-Sarb village in the southwest countryside of Hasaka province.

Local sources told SANA that a person was killed and three others were injured when a landmine went off in the lands of the village.