Tens of families exit the eastern neighborhoods of Aleppo 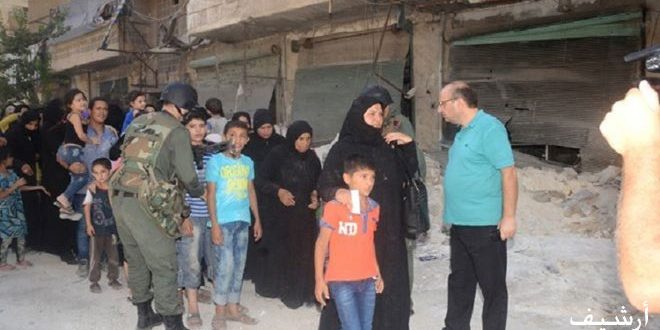 SANA reporter in Aleppo said that the Syrian Arab Army, in cooperation with the parties concerned, received tens of families that departed from Bustan al-Qaser, al-Sakhour, al-Fardous, Karm al-Daadaa, and the Old City and headed towards Sallah Eddin crossing point, and offered them all the required facilitations and transported them to temporary housing centers equipped with all necessities and basic livelihood requirements.

The reporter added that the families were provided with healthcare and aid, noting that the terrorists who are active in the eastern neighborhoods were preventing the entry of aid convoys to the civilians by targeting the road through which the convoys were to run with sniper fire.

Terrorists who are active in the eastern neighborhoods of Aleppo besiege the locals, use them as human shields, and occupy their houses to use them as positions from which they attack the safe neighborhoods in Aleppo with rocket and mortar shells and sniper fire.