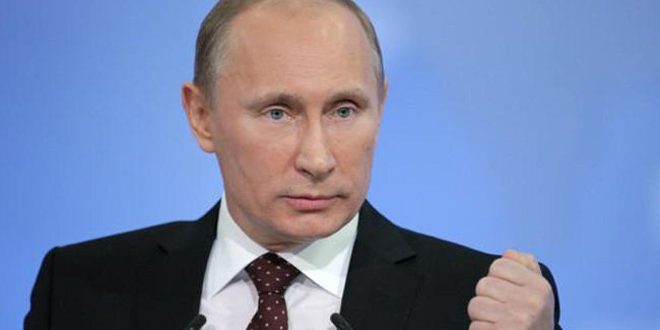 Hangzhou, China, SANA- The Russian President Vladimir Putin said that the possible agreement with the Americans about Syria will significantly increase the effectiveness of combating terrorism.

During a press conference at the end of G20 summit in Hangzhou City in China, Putin added ” There is a convergence of positions with Washington about Syria, yet we still have some technical details,” noting that the Russian foreign minister Sergei Lavrov and his US counterpart John Kerry will continue discussing the crisis in Syria.

Commenting on his meeting with the US President Barack Obama, Putin said that the Russian and US parties discussed all the issues on the table in detail and reached a mutual understanding, adding: “We have been engaged in face-to-face discussions in detail and I think that we have reached an understanding of each other’s positions and understanding the issues we face and we must address some technical points, and if Kerry and Lavrov could achieve this aim that means that we take a new step forward for the settlement of the crisis in Syria.”

Putin said “It is premature to talk about any frameworks to our agreement, but I count a lot on reaching an agreement and we are hopeful of achieving this goal during the coming few days,” adding “our joint work with the United States to combat terrorist organizations including the track Syria will significantly witness an improvement.”

Putin said that Moscow does not support any steps outside the international law, noting that the Russian talks with the Turks and Americans about Syria continue and that there is a certain convergence in attitudes and an understanding about the steps that can be taken in order to find acceptable solutions.

Putin explained that the Russian and US foreign ministries continue work to complete preliminary agreements for the foreseeable future about Syria before reaching final formulas after consultations with the Syrian government about the content of these agreements and informing other partners, particularly Iran.