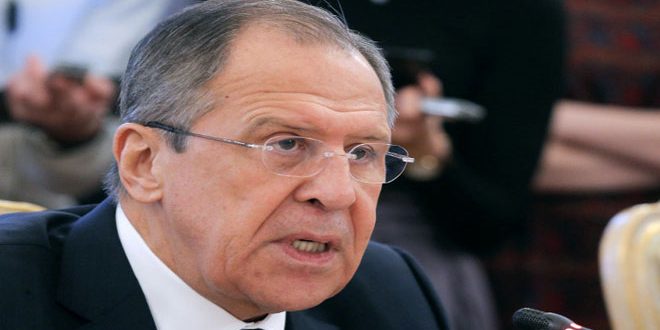 Moscow, SANA- Russian Foreign Minister Sergei Lavrov expressed during a telephone call with his Turkish counterpart Mouloud Jawish oglu Moscow’s concern about the actions taken by the Turkish forces and opposition groups affiliated to Ankara in northern Syria and its impact on the settlement of the crisis in Syria.

The Russian Foreign Ministry said in a statement that the two sides discussed the situation in Syria and exchanged views on the latest developments in it.

The Turkish regime violated blatantly the Syrian sovereignty in Jarablus area and deployed military forces under the pretext of fighting ISIS terrorist organization.

The Foreign and Expatriates Ministry said in two identical letters to UN Secretary General and Head of the UN Security Council that the violations and massacres committed by the Turkish regime by the invasion of the Syrian territories represent an aggression and crimes against humanity.

The Russian Foreign Ministry added that it was agreed that experts continue consultations in terms of cooperation in the implementation of UN Security Council resolutions about Syria.

The Russian Foreign Ministry pointed out that in addition to that, the two ministers discussed the current issues in Russian-Turkish relations, including the implementation of agreements reached between the Russian President and the Turkish president in St. Petersburg on August 9th in the context of a common understanding of the restoration of the bilateral relations between the two countries.