Relief aid distributed to families affected by terrorism in Aleppo 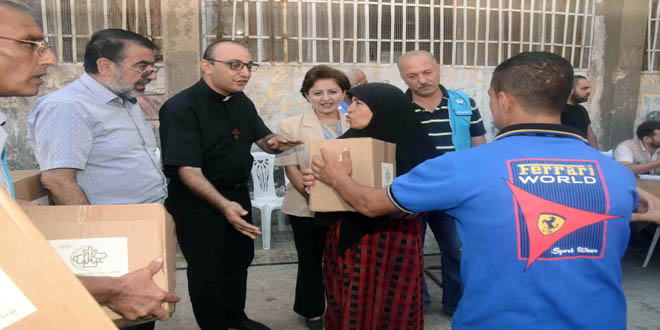 Aleppo, SANA- The Christian Union Anglican Church in Aleppo distributed on Wednesday food and health packages to a number of families affected by terrorism residing in the makeshift centers in the city.

Church pastor Abdullah al-Homsi said in a statement to SANA reporter that this initiative comes to emphasize the unity of the Syrian people and their standing by the families affected by the terrorist attacks, stressing that this step is part of the state’s efforts to take care of and serve the needy and affected families.

Homsi pointed out that al-Raei al-Saleh center which is affiliated to the church offers food and health aid for more than 2000 affected families monthly under the supervision of volunteers.

A number of persons who reside in the makeshift centers in Aleppo praised this initiative that reflects patriotism, emphasizing trust in the Syrian Arab Army which will defeat terrorism and help them return back home.