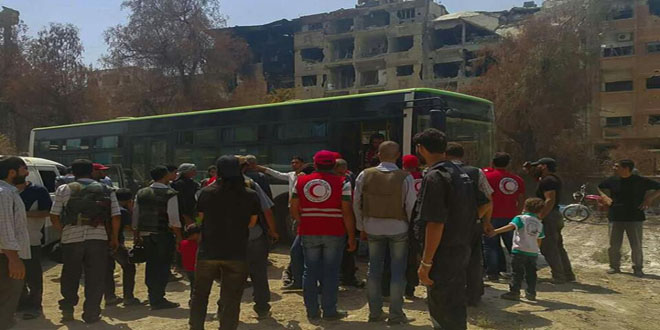 Damascus Countryside, SANA- As part of the settlement agreement which was reached to evacuate Daraya city in the Western Ghouta of arms and militants in preparation for the return of state institutions and families to it, the implementation of the first phase of the agreement started, including evacuating part of the people to temporary housing centers in Damascus countryside and 300 militants with their families towards the city of Idleb.

SANA reporter to the city of Daraya said that most of the people numbered 4000 will be relocated to temporary housing centers which the governorate of Damascus Countryside had prepared and provided them with all basic supplies.

The reporter pointed out that the columns of smoke that were seen in the city is a result of burning the militants to their sites along with all computers and communication devices inside them which indicates that they were connected to external bodies.

A field commander told reporters from inside Daraya city that the city will be empty from militants on Saturday, pointing out that 300 militants along with their families will be getting out of Daraya towards Idleb city while the rest of them will get out of the city tomorrow.

The Commander added that all the militants will leave their medium and heavy weapons in Daraya and the arms will be received tomorrow, noting that there are a number of gunmen demanded that their legal status be settled, adding that the Syrian government has agreed to settle the legal status of anyone ask for that it in accordance with laws and regulations.

He affirmed that the units of the Army and Armed Forces has recently carried out accurate and concentrated operations on the terrorists’ sites in order to protect the lives of civilians inside the city which contributed to a delay in restoring security and stability to the city, especially since the terrorists were using the people as human shields.

During the visit, the Governor said that the center has been provided with the necessary furniture and food supplies, in addition to 4 mobile clinics and a health services center to provide medical care for the people.

Ibrahim lauded the heroics and sacrifices of the Army and Armed Forces that led to ridding Daraya of terrorists, asserting that reconstruction and repairs will begin in the town very soon to repair infrastructure so that locals can return to their homes and jobs.

The center in Harjalla was set up by the temporary relief subcommittee in Damascus Countryside in cooperation with the authorities in the province. It consists of 724 housing units, 300 of them are fully prepared and equipped.