4 civilians killed, 25 injured in terrorist rocket attacks on residential neighborhoods in Aleppo and its countryside 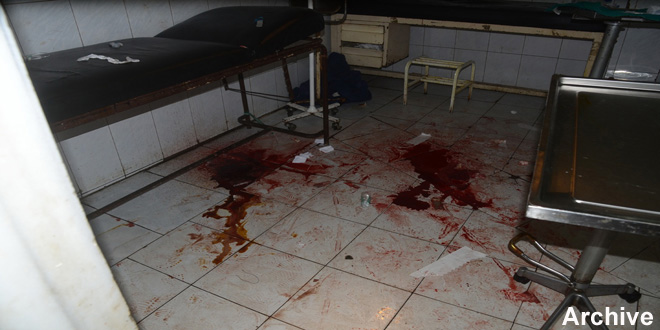 Aleppo, SANA- Four civilians were killed and 25 others were injured due to terrorist attacks with rocket shells fired by terrorist groups on residential neighborhood in Aleppo and its countryside.

A source at Aleppo police command told SANA reporter that a woman was killed and 11 other civilians were injured, some in critical conditions due to terrorist attacks by terrorist groups on al-Hamadaniyeh and Sallahuddin neighborhoods in Aleppo city.

The attack caused material damage to locals’ houses and properties.

Terrorists also fired rocket shells on al-Zahraa town, which is located 20 kilometers to the north of Aleppo city, killing three civilians including a woman, injuring 14 others and causing material damage to public and private properties.

On Sunday, four civilians were injured when a rocket shell fired by the terrorist organizations fell on al-Hamadaniyeh and Sallahuddin neighborhoods and near Saadallah al-Jabiri Square in Aleppo.

ِaleppo attacks civilians injured killed rocket terrorist 2016-08-22
qabas
Share
Previous Russian fighter jets launched from Hamedan base return to Russia after performing tasks successfully
Next Al-Jaafari: Governments which claimed being friends of Syrian people are the responsible ones for the Syrians’ suffering