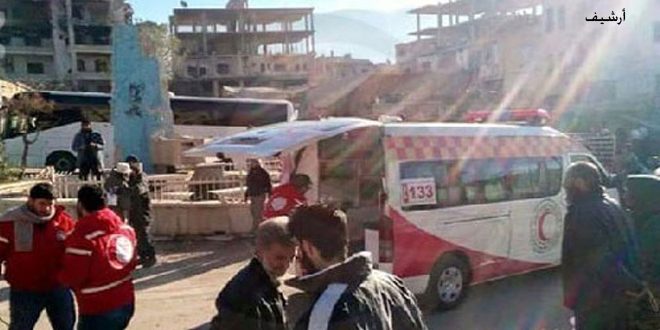 Idleb, SANA – Under the supervision of the Syrian Arab Red Crescent ( SARC), six civilians were evacuated on Sunday from Kafriya and al-Foaa besieged towns in the northern countryside of Idleb and Madaiya town in Damascus Countryside where terrorist groups are active.

A source at SARC told SANA that three civilians in critical conditions were evacuated from Kafriya and al-Foaa towns which are besieged by the terrorist organizations in parallel with evacuating three other cases from the town of Madaiya.

On Friday, 17 civilians, mostly in bad conditions were evacuated from Kafriya and al-Foaa in parallel with evacuating 18 cases from Madaiya.

On August 14th, after efforts that lasted for two days, the SARC evacuated the girl child Ghena Qweider who suffered a bullet shot due to a dispute among terrorist groups in Madaiya who prevented her from leaving to Damascus for treatment.