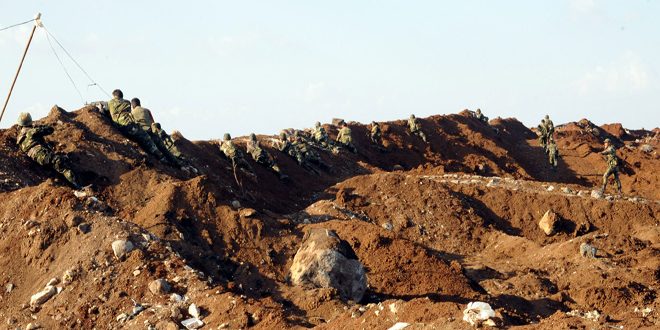 Provinces, SANA- A military source confirmed that scores of terrorists were killed during intensive air strikes carried out by the Syrian Air Force against gatherings and dens of the so-called Jaish al-Fateh, Jabhat al-Nusra and ISIS terrorist organizations in Aleppo, Idleb, Hama, Homs and Deir Ezzor.

The source said in a statement to SANA that during the past 24 hours, Syria’s Air Force launched 46 sorties and 26 helicopter sorties which targeted many gatherings for terrorists which supported the activities of the land forces.

The air strikes destroyed four vehicles for Jaish al-Fateh equipped with machine guns in the area surrounding the Military Academies south west of Aleppo in addition to two positions for Jabhat al-Nusra terrorists in al-Sheikh Said in Aleppo.

The strikes targeted a gathering for terrorists on Saraqeb- Aleppo axis which resulted in destroying a convoy of vehicles and armored vehicles in addition to killing scores of terrorists in Deir Hafer, Hmeimeh, Rasm al-Kama, Rasm Harmel and Beijan Hill in Aleppo and its countryside.

The Air Force inflicted heavy losses in personnel and vehicles upon Jaish al-Fateh terrorists in Idleb countryside as it destroyed a convoy of vehicles in the southern entrance of Armanaz city.

The air strikes against Jabhat al-Nusra terrorists in Homs countryside resulted in killing a large number of terrorists and destroying a depot in al-Ghantu village, two vehicles and a fuel depot in al-Zaafaraneh village.

The air strikes against a gathering for ISIS terrorists destroyed five vehicles and fortified positions in al-Jbeiliyeh in Deir Ezzor.

In the northern countryside of Hama, according to the source, air strikes targeted Jaish al-Fateh terrorists and destroyed two vehicles for them to the south of al-Lattamneh in addition to four vehicles equipped with machine guns in Kafar Zeta and al-Lahhaiya.

On Friday, the Air Force carried out 46 sorties and 13 helicopter sorties against gatherings of terrorist organizations in Idleb, Aleppo, Homs and Hama countryside.

A unit of the army and the armed forces on Saturday foiled an attack by Jabhat al-Nusra terrorists on military posts in the northern countryside of Hama central province.

A military source told SANA that a unit of the army in cooperation with the popular defense groups carried out intensive strikes against a group of Jabhat al-Nusra terrorists after they infiltrated towards military posts on the axis of Ma’an/al-Zalaqiyat, 40 km to the north of Hama City.

The source added that 3 BMB vehicles, 3 machinegun-equipped vehicles, a vehicle loaded with ammunition and a bulldozer were destroyed in the strikes.

A number of Jabhat al-Nusra terrorists were also killed and others were injured.

An army unit destroysed a depot for Jabhat al-Nusra terrorists with all terrorists inside in Housh al-Zawahra in the northern countryside of Homs.

Later, an Army and Armed Forces unit, in cooperation with popular defense groups, targeted terrorists’ gatherings, bases, and movements in the northern countryside of Quneitra province.

SANA reporter said that the army and popular defense groups used a guided rocket to destroy a car transporting members of Jabhat al-Nusra terror organization on the road between al-Hamidiye and Rasm al-Rawadi, killing all the terrorists inside it.

Another unit stationed in Khan Arnaba north of Quneitra city targeted several bases of al-Nusra terrorists in al-Hamidiye and Quenitra city, killing a number of them, injuring others, and destroying their weapons and munitions.