Prime Minister: More flights to be launched next week 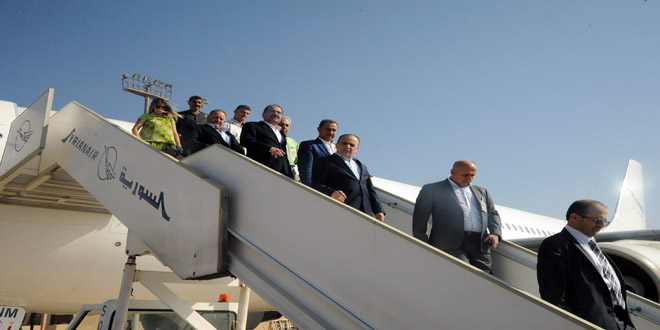 Premier Khamis affirmed the government’s keenness to provide all forms of support for the aviation sector, pointing out that more flights will be launched during the next week in order to meet the needs of growing number of passengers.

He revealed that an aircraft will be put into service early next week and another aircraft later which will reduce congestion and long waiting, stressing on the need for periodic maintenance for all the aircrafts to ensure safety in accordance with the plan to restore all the inactive aircrafts through weekly and monthly maintenance programs.

In a relevant context, Eng. Khamis presided over a meeting at the Transport Ministry to discuss the status of the aviation sector in Syria and the future strategies to develop it to return the Syrian Arab Airlines establishment to normal.

In a press statement as he inspected work at the Passports and Immigration Department in the Airport, Interior Minister Mohamed al-Shaar hailed the efforts exerted by the staff to provide all facilitations for citizens, affirming that the ministry will enhance its services and its facilitations for the arriving and departing passengers.

In a similar statement, Transport Minister Eng. Ali Hammoud said that a fixed aircraft has been rehabilitated by the staff of Syrian Arab Airlines establishment, adding that the plane will fly within a couple of days.

He pointed out that another plane will be rehabilitated soon which means that two aircrafts will be put into service, adding that a number of measures has been taken to improve the services in the Airport as well as increasing the flights’ numbers.