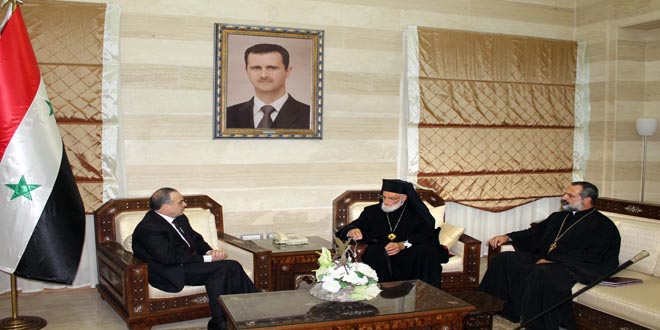 Damascus, SANA – Prime Minister Imad Khamis appreciated the honorable national stances of Christian and Muslim clergymen that contribute to strengthening the society intellectually, culturally and ideologically and fortifying it against terrorism and extremism.

Meeting with the Melkite Greek Catholic Patriarch of Antioch and All the East Gregory III Laham on Wednesday, Khamis referred to the role which men of religion
could play in conveying the true image of what is going on in Syria in terms of the systematic terrorism targeting its people.

For his part, Patriarch Laham expressed his confidence that Syria will remain an example of coexistence and tolerance among religions, asserting that Syria
will defeat its enemies thanks to the resilience of its people and steadfastness of its army.

On August 7th, Patriarch Laham called in Beirut for a unified international stance to defeat the terrorists, describing the terrorist attacks hitting in Syria, Iraq, Palestine and other world countries as “a shame on humanity”.