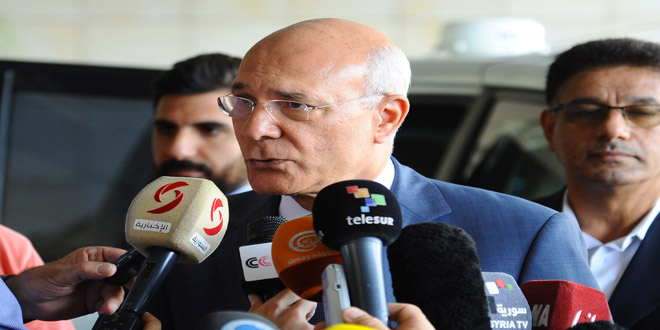 Damascus, SANA- Deputy Special Envoy for Syria Ramzy Ezzeldin Ramzy said that his meeting with Foreign and Expatriates Minister Walid al-Moallem and his deputy Dr. Fayssal Mikdad on Sunday is part of the ongoing meetings between the envoy’s office and the Syrian government to discuss the political process.

In a press statement held on Sunday at the Four Seasons Hotel in Damascus, Ramzy said: “During the meeting, I talked about some issues related to the political process, including the political transition and how to make it credible,” adding that al-Moallem stressed that the Syrian government sticks to its position and will participate in talks due to be held within weeks by the end of August.

Ramzy pointed out that head of the UN ‘s office Khawla Matar has concluded her mission in Syria and will be replaced by Stephanie Khoury.