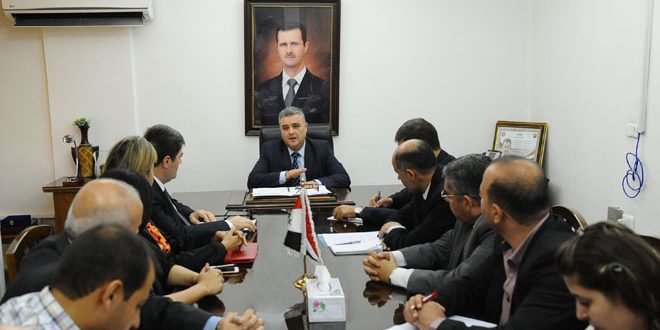 Damascus, SANA-Information Minister Mohammad Ramez Tourjman affirmed the importance of continuing to develop the media performance of the Syrian Arab News Agency (SANA) with the available capabilities and activating it as much as possible so as to maintain teamwork and make it a success.

During a visit to SANA on Wednesday, the minister called for redoubling the efforts of workers to provide the news with credibility and high efficiency and to continue to work with professionalism, pointing out the government’s interest in developing national media and strengthening its role in following up the citizens’ issues and defending national and pan-Arab issues.

In turn, SANA Director General Ahmad Dawa and heads of agency’s departments reviewed the work mechanism in the agency and what has been achieved by SANA in the editorial and technical sides as well as following up on the work of international agencies, broadcasting news in eight languages in addition to using video service and the agency’s presence in all social networking sites.

For his part, Dawa pointed out that SANA has completed archiving nearly one million documents and more than 200,000 images over the past five years by the efforts of its staff.

The minister toured the agency’s departments and listened to their staffs’ comments about their work.

Established in 1965, the Syrian Arab News Agency (SANA) is the main provider of news in the country and provides the local, Arab and international media outlets with local news.

The agency has a website that provides news in eight languages which has the largest number of followers among Syrian and Arab news sites.