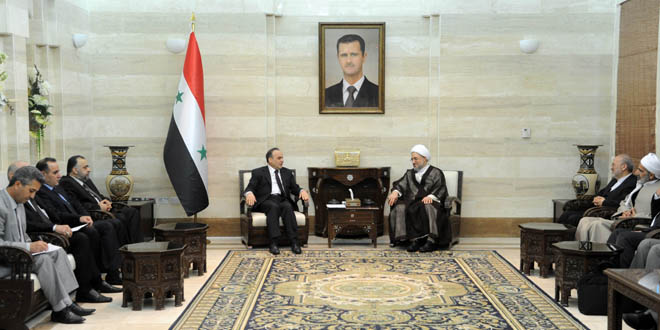 Damascus, SANA – Prime Minister Imad Khamis discussed on Tuesday met a delegation of religious from Iran headed by Mohsen Araki, Secretary-General of the World Forum for Proximity of Islamic Schools, discussing with them the role of religious scholars in confronting the terrorist ideology which aims at distorting Islam and destabilizing its foundations.

They also discussed a number of proposals on practical steps to spread the thoughts of true, moderate Islam through committees and religious forums, in addition to the role of states and governments in supporting religious facilities to consolidate the Islamic thought and enhance the national unity among people.

The Prime Minister asserted the Syrian leadership and government’s support to the religious facilities, and its keenness to combat Wahabi thoughts and spread true moderate Islam that calls for love, tolerance, and communal living, adding that this is done via cooperation and coordination between the religious scholars in Syria and the Arab and Islamic countries to achieve rapprochement among all religions and schools and to achieve intellectual development for the future generations.

Khamis expressed appreciation and thanks to the Iranian leadership and people for their support to the Syrian people, noting that Syria stood against the terrorist war thanks to the sacrifices of the Army and Armed Forces and the patience and resistance of Syrians and their standing by the Syrian leadership and army to maintain the country’s security and stability, not to mention the support offered by Syria’s friends.

For his part, Araki underlined the role of the Syrian people and leadership in maintaining the integrity of the Islamic nation and the Palestinian cause and fighting the enemies which target the Islamic religion and its followers, expressing confidence that Syria will achieve a great victory against this aggression thanks to the steadfastness and resistance of its people. Talks during the meeting touched on the strategic relations between Syria and Iran and the need to keep bolstering them in all fields, particularly in cultural, scientific, and religious fields, in addition to discussing the situation in Syria and the regions and the attempts by certain well-known sides and states to use terrorism to cause division among sects and destabilize Islamic countries.

Minister al-Moallem briefed the delegation on the developments in Syria and the achievements being made by the Syrian Arab Army in fighting terrorism, asserting that all components of the Syrian people stand as one in the face of Takfiri terrorism.

He asserted that Syria is prepared to cooperate to bolster cultural cooperation between the two countries, expressing Syria’s appreciation for Iran’s positions in support of Syria against terrorism and the regional and international forces that support it.

For his part, Araki lauded the steadfastness of the Syrian people and leadership in the face of terrorism, asserting that Iran will continue to support Syria in confronting Takfiris who are enemies of Islam and Muslims.

He also voiced confidence in Syria’s abilities and hoped that security and stability will be restored to it soon.