Minister to US Peace Council delegation: The government takes measures to secure the necessary needs for the displaced people 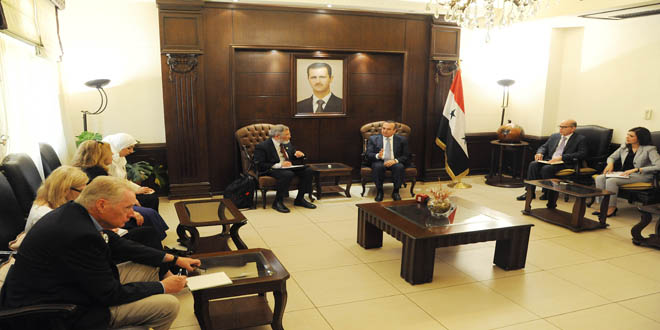 Damascus, SANA- Minister of Local Administration Hussein Makhlouf said on Monday that the government is committed to provide the necessary needs for the displaced people in various areas contrary to the misleading image that the Western media tries to convey to the world.

Makhlouf, meeting a delegation of the US Peace Council, headed by Henry Lowendorf, added that Syria, which provides the basic needs to all citizens, like education, health and water services and electricity, was and still is an example for different countries in this field.

Regarding the displaced Syrians abroad and inside the country, Makhlouf said that housing units are built in preparation for the return of the refugees, adding that the government formed a committee for reconstruction and for paying compensations to citizens whose houses were damaged due to the sabotage by the armed terrorist organizations.

In turn, members of the delegation affirmed that they will convey the image that reflects the reality and facts, which they noticed during their visit to Syria, to the American people and the world, hoping security and safety would return to Syria.