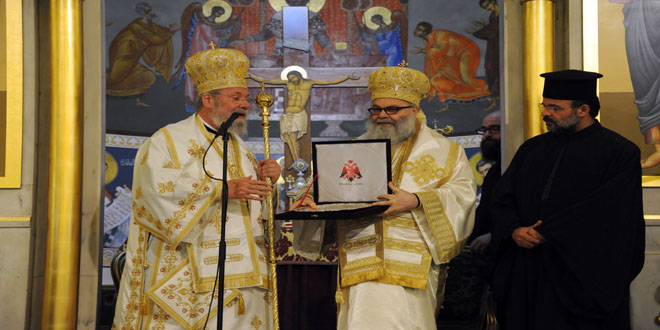 Damascus, SANA-A mass was held at the Church of the Holy Cross in Kassaa neighborhood in Damascus, headed by Greek Orthodox Patriarch of Antioch and All the East John X Yazigi and Archbishop of Nova Justiniana and All Cyprus Chrysostomos II.

Patriarch Yazigi pointed out that the unified Syrian family, Muslims and Christians included, is steadfast in facing conspiracy and terrorist war thanks to their support for the Syrian army, the brave leadership of President Bashar al-Assad and adherence to the homeland.

For his part, Archbishop Chrysostomos II affirmed that his visit came to express solidarity with the Syrian people.

Following the mass, a reception ceremony was held in honor of the Cypriot guests in the Church’s hall.

Grand Mufti of Syria Ahmad Badr Eddin Hassoun affirmed on Sunday that Syria is fighting terrorism on behalf of Europe and the world.

During a meeting with Archbishop of Nova Justiniana and All Cyprus Chrysostomos II, Mufti Hassoun called on the regimes of Turkey, Saudi Arabia and Qatar to stop supporting terrorists.

For his part, Archbishop Chrysostomos II said that he will convey the true image of what is happening in Syria and the suffering of the Syrians due to terrorism.