Over a 100 terrorists killed, 19 vehicles and a command center destroyed in army operations 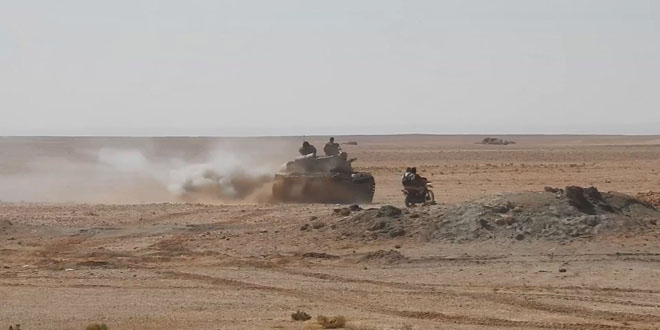 Provinces, SANA- The Syrian Army units and Air Force on Wednesday continued to target positions and vehicles of the terrorist organizations in different areas across the country, destroying their vehicles and inflicting heavy losses upon them in the personnel and equipment.

The Syrian Air Force destroyed 13 armored vehicles equipped with machineguns and killed more than a hundred ISIS terrorists in the surroundings of al-Mufagar al-Sharqi in the countryside of Salamyieh city in Hama  province, a military source said.

The operations also resulted in destroying a number of positions including weapons and ammunition.

Six armored vehicles equipped with machine guns belonging to ISIS terrorists were destroyed by the army’s air force in the villages of Habra Sharqiyeh and Habra Gharbiyeh, 70 km east of Homs city.

Many ISIS terrorists were killed as army airstrikes hits their positions to the east of Tadmur (Palmyra) and in the surroundings of Mahassa in Homs eastern countryside.

A command center and vehicles equipped with machine guns were destroyed in army airstrikes that hit gatherings of ISIS terrorists in the cities of Raqqa and al-Tabqa.

The air force also targeted positions and movements of ISIS terrorists in al-Tibni village, 40 km northwest of Deir Ezzor city, destroying an ammunition depot and a number of vehicles equipped with machine guns.

An army unit targeted fortifications and gatherings of Jabhat al-Nusra terrorists east of Khazan al-Karak in Daraa al-Balad area in Daraa city, killing a number of them and destroying their weapons and ammunition.

Also in Daraa al-Balad, an army unit killed members of a Jabhat al-Nusra terrorist group as they were involved in monitoring operations, while 20 more terrorists were killed or injured in army operations in al-Nazihin Camp and al-Matahen.

The army also eliminated a gathering of Jabhat al-Nusra terrorists in al-Dahdah Farm and in the eastern quarter of Busra al-Sham city, about 40 km east of Daraa city. A mortar position and rocket launchers were destroyed in the operations.

Later on the day, an army unit destroyed a position for terrorist groups, along with the weapons and equipment inside it, to the west of Tal al-Zaatar on al-Yadouda road in the western countryside of Daraa province.