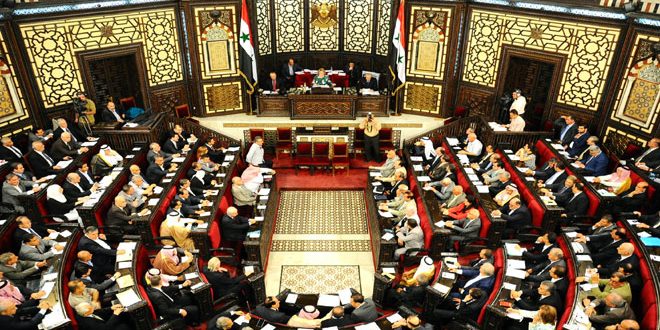 Damascus, SANA- The People’s Assembly held on Sunday its third session for the first ordinary round of the second legislative term, headed by Speaker Hadiyeh Abbas.

During the session, Assembly members stressed the need to find a new mechanism to address services and livelihood issues that concern citizens, particularly urgent ones, by dedicating sessions for specific areas and provinces and raising issues related to them in order to find appropriate solutions.

The members also called for providing all the necessities for bolstering the steadfastness of the people of Aleppo by increasing the number of ambulances and services vehicles and boosting the work of the Aleppo branch of the Syrian Arab Red Crescent in light of the terrorist attacks that target it, particularly the ones that targeted it in the past few days and claimed the lives of dozens of civilians and caused the destruction of buildings and infrastructure.

Members of the People’s Assembly also underlined the need to be strict in dealing with the issues of abduction and the theft of properties in some areas.

During the session, the members of the permanent committees of the People’s Assembly were named, taking into account the needs of the committees. Offices for these committees will be elected later on Monday.

Some members suggested establishing new committees to enable them to fully perform their duties.

ِaleppo Parliament People's Assembly 2016-07-10
Hazem al-Sabbagh
Share
Previous Tehran: military, financial support offered by some states to terrorists is main reason for inflaming wars in region
Next One person killed, 11 others injured in terrorist attacks in Damascus countryside and Aleppo