The Minister said that the hospital will launch an oxygen generator station to produce 35 oxygen cylinders per day, pointing out that a disposal unit for medical waste will be provided to the hospital next week.

“In addition to the public hospitals, there are 85 health centers which will offer services to the citizens during Eid al-Fitr holiday,” the Minister said.

Al-Nayef met some patients, asking them about the medical services that they have received in the hospital.

Al-Qtayfeh Hospital was inaugurated in 2012 with a cost of SYP 440 million. It accommodates 60 beds and its capacity can be increased to 100. 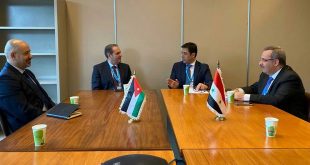