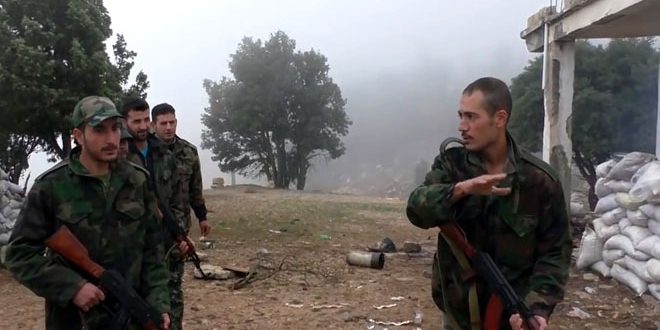 A military source said on Saturday that many terrorists were killed during the military operation and a vehicle equipped with a machinegun was destroyed in Tallat al-Rasia al-Hamra in addition to an ammunition cache in the area of Madajen al-Farouq to the east of al-Mofakker town.

The source added that another army unit expanded its control over the farms of al-Zahria and Ambouti in the eastern countryside of Salamiyeh after eliminating the last gathering of ISIS terrorists and destroying their weapons.

On a relevant note, the authorities in Hama arrested a gang responsible for acts of kidnapping and armed robbery in the province’s western countryside.

A source in the province told SANA’s correspondent that after careful monitoring and investigation, the authorities pursued the gang on the road between Mhardeh and Deir Shmeil and arrested two of the gang members after setting an ambush for them.

Two ISIS positions and a number of vehicles, some equipped with heavy machine guns, were destroyed in army airstrikes in the surroundings of al-Tharda Mountain on the southern outskirts of Deir Ezzor city.