Lavrov: Timeline for separation of armed groups and Jabhat al-Nusra ends this week 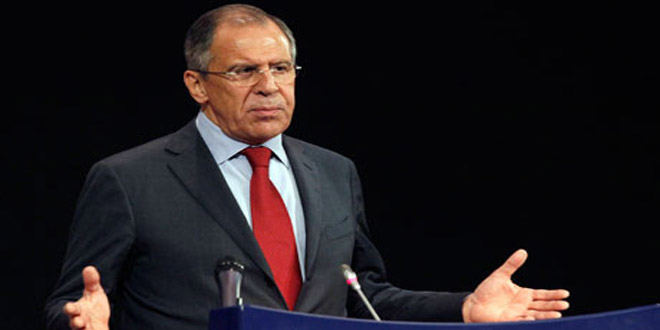 In an interview with the Russian Komsomolskaya Pravda newspaper published on Tuesday, Lavrov said the Russian aerial forces will start delivering airstrikes against any armed group that does not separate from Jabhat al-Nusra by the deadline.

He explained that the US asked Russia to extend the deadline for a few days before Russia begins the plan it announces before in which all those who haven’t joined the cessation of hostilities agreement become viable targets, and this extension expires this week.

The Russian Foreign Minister blamed the delay in setting a date for the next round of intra-Syrian talks in Geneva on the delegation of “Riyadh opposition” group.

Lavrov also asserted that within the first few months of their operations in Syria, the Russian Aerospace Forces managed to achieve a shift in the situation on the ground, and that clearly there are those who want to stop or reverse this process.

He added that in a recent phone call with US State Secretary John Kerry, he asked him why the Washington-led alliance practically stopped targeting terrorists in Syria and why it doesn’t do anything to stop the smuggling of oil to Turkey, explaining that Kerry repeated the same excuses based on the flawed logic that claims terrorist locations are intermixed with locations of what the Americans deem “good guys” and therefore they can’t target terrorists.

On another note, Lavrov called on the Turkish regime to apologize for shooting down the Russian fighter over Syrian territories before it talks about normalizing relations.

In a relevant context, Russian Defense Ministry denied the allegations that the Russian Air Force delivered airstrikes on terrorists’ sites in Idleb province.

In a statement published by RT website, Russian Defense Ministry spokesman Major General Igor Konashenkov said the Russian Air Force has not conducted any combat missions or airstrikes in the Idleb province.

The information about Russia’s alleged airstrikes has been spread by the US-based Syrian Observatory for Human Rights (SOHR).

“We urge people to remain critical of any scare stories spread by the ‘British tandem’ of the Syrian Observatory for Human Rights (SOHR) and Reuters news agency,” Konashenkov said.

The Defense Ministry spokesman also said that in previous cases when Russia had presented official data recorder information that disproved SOHR claims, neither Reuters nor the UK-based organization had published the refutations.

Meanwhile, Chairman of the Russian State Duma’s defense committee Admiral Vladimir Komoyedov said that Russia will not postpone targeting the terrorists of Jabhat al-Nusra in Syria before situation be escalated as some powers tarry to agree with Moscow to strike the terrorists’ positions in Syria.

“The advent of the Zero hour is inevitable because any delay could lead to aggravating the situation,” Komoidov said at press conference in Moscow.

He added “if the Americans don’t want to support us to work together, I think that Russia will bomb the positions of Jabhat al-Nusra with the aim of providing support to the Syrian forces”.