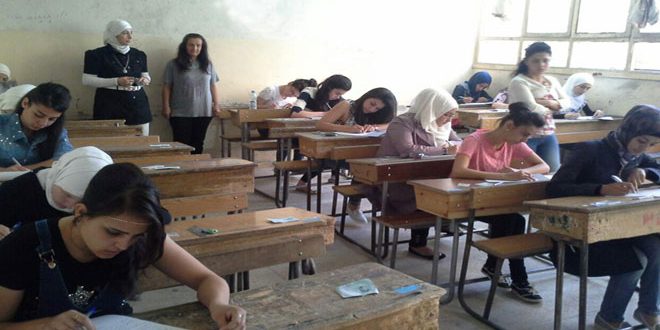 The students can stay at the centers, which were prepared in cooperation between the Education Directorate of Damascus Countryside, and have been fully equipped with all the livelihood requirements and other necessary needs.

In a statement to SANA reporter, Khaled Rahima, Head of Damascus Countryside Education Department, said students of Douma and Eastern Ghouta were taken to a temporary center set up at al-Dweir Camp in Damascus countryside, while the students of Madaya were moved to al-Rawda Municipality in al-Zabadani City.

He added that buses were will be used to move the students of Moaddamiyet al-Sham to their exam centers in Jdaidet Artouz town and others to transport the students of al-Rheibeh and Jairoud areas, noting that Damascus Countryside Governorate will offer daily breakfast meals for students after their return from their exams and will provide them with food packages on the last day of exams when they return back home to their families.

In a statement to SANA, Bassam Karbouj, head of Muaddamiyet al-Sham city council said that the directorate has already specified exam centers in al-Mazzeh and Jdaidit Artoz areas.

Karbouj pointed out that 75 teachers were also evacuated from the same area to monitor the exams in a number of exam centers in Damascus and its countryside, explaining that Damascus Countryside Governorate has provided a number of buses to transport students from Muasdamiyet al-Sham to their exam centers and vice versa.

For their part, the students thanked the authorities for their exerted efforts in order to evacuate them and make them able to take their exams.

On May 15th, 360 students were evacuated from Muaddamiyet al-Sham to take their Basic Education final exams.