5 civilians killed, 21 others injured in terrorist attacks on Aleppo and Homs 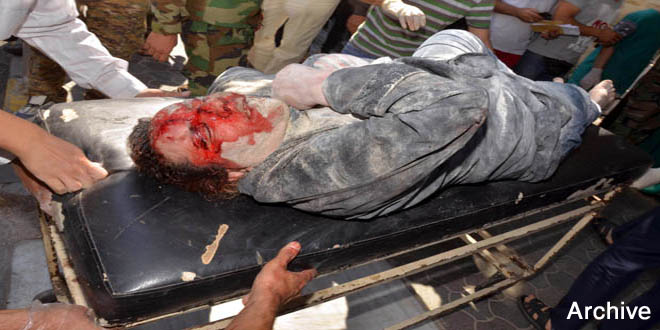 Aleppo, Homs, SANA- Five civilians were killed and 21 others were injured in terrorists attacks with rocket shells, sniper shootings and explosive shots on residential neighborhoods in Aleppo city on Sunday in a new breach of the cessation of hostilities agreement.

Two persons were killed and two others were injured in terrorist attack with rocket shell on al-Serian neighborhood which is located on the northwestern side of Aleppo city, leaving material damage to the neighborhood.

Terrorists fired a rocket shell on Bustan al-Zahra neighborhood, injuring a child and breaking fire in one of the residential buildings.

A person killed due to wounds he sustained in a terrorist rocket attack targeted al-Sheikh Maqsoud neighborhood on Sunday, according to local sources.

In Homs, terrorist groups targeted al-Arman neighborhood with two rocket shells, in a new breach of cessation of hostilities agreement .

A source at Homs governorate told SANA reporter that the attack left material damage to the private and public properties with no human casualties.

Terrorist groups keep targeting safe neighborhoods with mortar, rocket shells and car bombs in a desperate attempt to underestimate the Syrian army’s successes in the eastern countryside of Homs and to foil the national reconciliations achieved in the province.

Terrorist groups breached the cessation of hostilities more than 600 times since it came into effect on February 27.
Reem/Barry/ Ghossoun